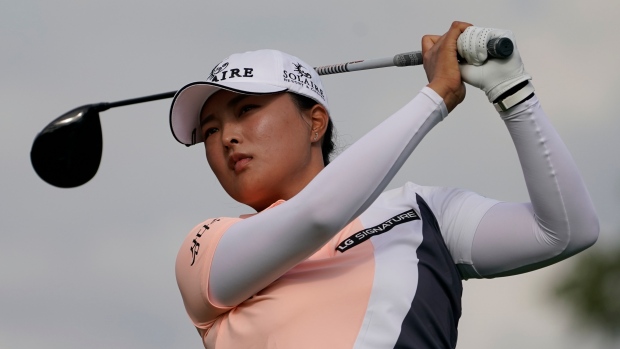 WEST CALDWELL, N.J. — Jin Young Ko had a three-stroke lead with four holes left Friday when second-round play in the LPGA Tour's Cognizant Founders Cup was suspended because of darkness.

Play was delayed 2 1/2 hours at the start because of fog, the second straight day that fog forced a late start at Donald Ross-designed Mountain Ridge. Sixty-three players were unable to finish.

The second-ranked Ko was 10 under. She opened with an 8-under 63 on Thursday for a three-shot lead. She has 11 consecutive rounds in the 60s, three short of the record that Annika Sorenstam set in 2005.

In six starts since losing the top spot in the world to Nelly Korda at the KPMG Women’s PGA, Ko has won twice, been runner-up and had two other finishes in the top 10. The 26-year-old South Korean star had control of the ShopRite LPGA Classic last week in southern New Jersey until she missed a series of putts from the 10-foot range, including the last hole to finish one shot behind Celine Boutier.

Lindsey Weaver, So Yeon Ryu and Perrine Delacour were tied for second at 7 under. Weaver shot a 67, while Ryu had four holes left, and Delacour seven to go.

“Literally, nothing is more important (than finishing). I was telling my caddie, `I would hate to be playing No. 9 at 7 a.m. tomorrow morning,’” Weaver said. “I’m happy to be done, even though I made bogey on it. I’m just happy I don’t have to wake up at 5 a.m. tomorrow. I’m good. I’m happy with it.”

In Gee Chun, Xiyu Lin, Chella Choi and Jenny Shin were 6 under. Chun had six holes left. Lin, Choi and Shin each shot 68-68.

Brooke Henderson of Smiths Falls, Ont., was tied for ninth after a 1-under 70 round put her at 5 under overall. Hamilton's Alena Sharp (73) is projected to miss the cut as she sits in a tie for 87th at 2-over par.

Korda was 5 under with three holes left. She's making her first start since the Solheim Cup a month ago.

Ko is the defending champion in the event, having won in 2019 in Phoenix. The 2000 event was canceled.