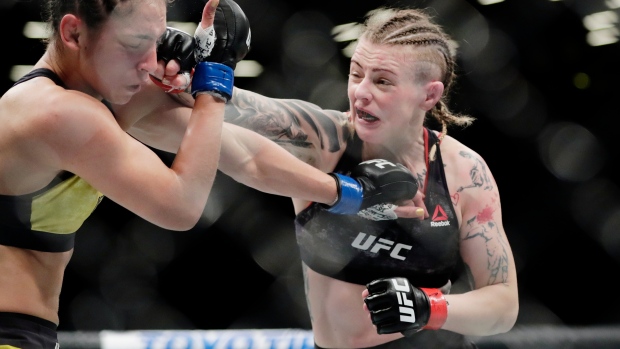 Joanne Calderwood’s road back to the title shot she never got starts this Saturday as she faces Jessica Eye at UFC 257.

Calderwood was scheduled to face flyweight title holder Valentina Shevchenko at UFC 251, but when the champion pulled out of the bout, she elected to take on Jennifer Maia two months later.

She would go on to lose the fight, but that was just the beginning of her problems that night.

While being checked out backstage, Calderwood passed out and had to be transported to a local hospital.

"Yeah, it was pretty serious,” said Calderwood. “The whole day I wasn’t feeling good, didn’t have enough to eat and drink that day, I’m usually on that. I just wasn’t feeling right the whole day and then afterwards I passed out. I just tried to stand up and my legs went away from me. Apparently my heart rate dropped and they were worried and then I got COVID a few days later, so we think it’s just been that and maybe what I went through that night. Happy to be here and healthy.”

Now the Irvine, Scotland native is ready to face Eye, a fighter that she had a social media exchange with last year, leading to bad blood between the fighters.

Eye missed weight before a short notice fight against Cynthia Calvillo, a bout that Calderwood says she was willing to take and that she wouldn’t have failed on the scale.

"I was kinda annoyed because I was ready to fight and I would’ve made weight,” said Calderwood. “I heard that she was not .2 over, she was four pounds over the morning of, so I was just calling her out. I want to get the curtain trick banned, because I think she used that. I put that on the Twitter world and she just attacked me back for my honesty.”

Animosity aside, The 34-year-old feels confident heading into Saturday’s bout against Eye.

"I like this matchup and we actually wanted this fight last year,” said Calderwood. “I’m looking forward to this matchup, I like her style for what I’ve got. She always brings it, so it will be an exciting fight.”

With a victory, Calderwood could be in line to face the winner of the rumoured upcoming title bout between Shevchenko and Jessica Andrade, a fighter she lost to in 2016.

"That’s a win/win for me,” said Calderwood. “I would like to fight Jessica again and I think she could win. If she did, I’m sure I would meet Valentina anyway, it doesn’t have to be when she’s champion, I would love that challenge. If Jessica did get it off her, I would be more than happy to fight both of them.”