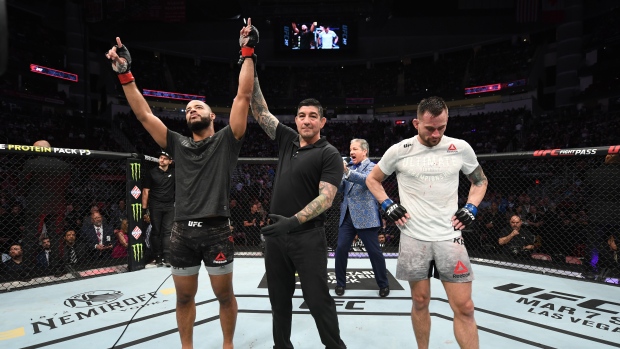 Mixed martial arts judge Joe Soliz, who drew the ire of UFC fans and analysts for his scoring of multiple bouts at UFC 247 in Houston on Feb. 8, has a connection to the gym of one of the fighters he controversially ruled in favour of on the card.

Soliz judged five different matchups during the event, including a middleweight bout between Trevin Giles and James Krause. While it was a close fight, most observers felt the first round was definitively in Krause’s favour but was scored for Giles on Soliz’s scorecard.

Had Soliz scored the first round for Krause, and assuming the rest of his scorecard would have remained as it was submitted, Krause would have won a split-decision victory. Instead, the outcome was a split decision awarded to Giles.

Since the conclusion of the event, TSN has learned that Soliz has a connection to Elite MMA, the gym where Giles trains under coach Eric Williams, who was in Giles’ corner for the bout. Soliz is also connected with Giles as a friend on Facebook.

“Under Eric Williams of Elite MMA, I received my black belt in 2008,” Soliz told TSN. “I left Elite in 2010, and received my first-, second-, and third-degree under Octavio Couto.”

UFC 247 was sanctioned by the Texas Combative Sports Program, which assigns judges to each matchup.

“I haven’t been in contact or associated with [Elite MMA] in over eight years,” Soliz told TSN when asked if he should have disclosed the relationship as a potential conflict of interest before accepting the judging assignment.

Soliz was also a Jeet Kune Do and Progressive Fighting Systems instructor at Elite MMA (then known as Elite Martial Arts) as early as 2002 and, according to Williams, started training at the gym in the 1990s.

“I’ve known Joe for years,” Williams told TSN. “I haven’t talked to him in probably a year and a half or two years. The problem is it's kind of a small world, so you get people crossing paths and I think that you're going to have stuff like that happen. Whenever you can prevent it, I would. But again, I don't worry about it. If you finish the fight, you don't have to worry about those kinds of things. I really don't concern myself with it."

Texas Combative Sports Program spokesperson Tela Mange told TSN that Soliz answered “no” to the question “Do you have a direct or indirect financial interest in the management of a contestant, manager or sanctioning body?” on his licensing application.

Mange wouldn’t confirm whether Soliz disclosed any other conflict of interest, citing potential complaints that could be filed.

“When [a judge is] approached to be part of the event, they are supposed to tell the commission, ‘I can't judge a particular bout because I know somebody,’ or if it's something that there are a number of conflicts, then they need to tell the commission,” Mange said. “We have a number of judges that we can rely on. We get input from the UFC or any other promoter that we’re doing events with for people that they would prefer and we just go from there.”

Mange added that the Professional Boxing Safety Act of 1996/Muhammad Ali Boxing Reform Act, the federal law that protects the rights and welfare of boxers and aids state boxing commissions with the oversight of the sport, covers conflicts of interest for boxing matches of 10 rounds or more, but does not address MMA bouts.

“I’m assuming they all know,” Williams said when asked whether Soliz should have disclosed a potential conflict of interest to the commission. “We’ve all been around for years. I would be highly surprised if the boxing commission doesn’t know.”

Marc Ratner, the UFC’s senior vice-president of regulatory affairs, was unavailable for comment.

UFC colour commentator Joe Rogan has been among the more vocal critics of the judging that took place at UFC 247, and Soliz’s scores in particular.

“The first round, Krause had his back for four minutes and [Soliz] gave that round to Giles, which is insane,” Rogan said during an episode of his podcast, The Joe Rogan Experience, last week. “Krause was really close to submitting him a couple times during those four minutes and the same judge who gave four rounds to Jon Jones, gave that first round to Giles, where there was a dude on his back for four [expletive] minutes.”

When questioned about his methodology for scoring the first round for Giles, Soliz said that he wasn’t permitted to make any statements regarding the bouts he judged. He declined to discuss the situation further.

“I was informed that one of the judges of the James Krause versus Trevin Giles bout had a close previous relationship with one of Giles’ coaches,” House wrote in a statement to TSN. “If true, this is deeply concerning. These athletes risk and sacrifice too much for there not to be a fair playing field. As we are currently in the appeals process, we are withholding further comment. It is our hope that the appeals process will work as designed and uphold the integrity of our sport.”

John McCarthy, a Bellator MMA analyst who is also a referee and judge instructor for the Association of Boxing Commissions and Combative Sports (ABC), as well as the creator of an ABC-accredited MMA referee and judging training school, said he considers Soliz’s situation a conflict of interest.

“The judge should have approached the athletic commission, depending on if the executive director is there or a lead inspector, [whoever is] the person that’s in charge of regulating that event at that venue that night,” McCarthy told TSN.

“If they found out while they’re there that this person is cornering someone and they see that they’re assigned to that fight, they should go to the executive director [or lead inspector] and tell them, ‘I have trained with that person, I have received my black belt from them and I want to recuse myself from this fight.’ Then it’s up to the commission on whether or not they can judge. Most will never allow you to judge a fight when you have that sort of background with a cornerman or fighter.”

According to the website MMADecisions.com, a database of scorecards from previous MMA events, Soliz had some experience judging events held by major promotions before UFC 247. He submitted scorecards for three UFC events and one Bellator event from 2014 to 2019, and served as a referee at UFC 192 – all of which took place in the state of Texas.​