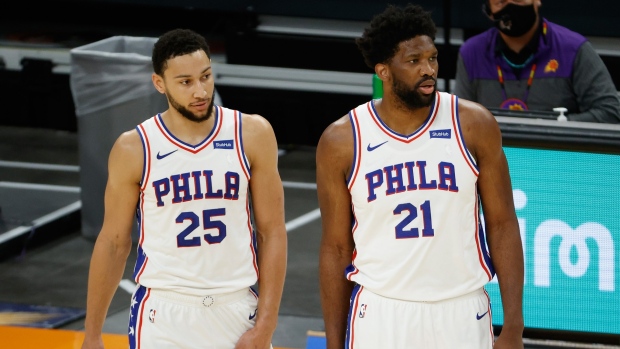 Joel Embiid gave possibly his most candid remarks yet on Thursday when asked about Ben Simmons’ desire to be traded from the Philadelphia 76ers.

Embiid told reporters the 76ers had built their team around Simmons and made roster decisions based on his playing style.

"I feel like our teams have always been built around his needs. So it was kind of surprising to see. I mean the reason we signed Al [Horford] is [Simmons]. We got rid of Jimmy [Butler because] he needed the ball in his hands,” Embiid said.

"We've always had shooters, and I feel like I can really play with anybody, and I can make anybody be better on the court...We are a better team with him. There's no question about it. We still hope that he changes his mind."

Earlier in the week, The Athletic’s Sam Amick reported Simmons believes his time playing alongside Embiid has “run its course.”

Embiid was no fan of the idea that the two can't play together.

"The situation is disappointing, borderline kind of disrespectful to all the guys that are out here fighting for their lives. Some guys rely on the team being successful to stay in the league and make money," Embiid said.

The Athletic adds that Simmons’ main grievances with the 76ers appear to be post-game quotes from Embiid and head coach Doc Rivers after their Game 7 loss to the Atlanta Hawks in the Eastern Conference semi-finals as well as a trade last winter that nearly sent him to the Houston Rockets in exchange for James Harden.

Embiid mentioned Simmons passing up an open layup in Philadelphia’s Game 7 loss as the “turning point” in the eventual defeat and he didn’t change his stance when asked about it at training camp earlier this week.

The Sixers themselves appear to be confident in eventually mending the fence with Simmons, or at least they’ve been saying that publicly.

“Look, every situation is different, but we have a lot of optimism that we can make it work here,” general manager Daryl Morey said.