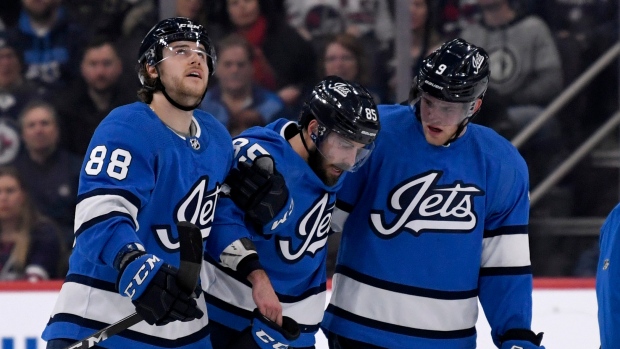 Philadelphia Flyers forward Joel Farabee will have a hearing on Monday for interference on Winnipeg Jets forward Mathieu Perreault during Sunday night's loss.

Philadelphia’s Joel Farabee will have a hearing tomorrow for Interference on Winnipeg’s Mathieu Perreault.

Post game Paul Maurice says that Mathieu Perreault is moving around and will be evaluated again tomorrow.

After the game, Jets head coach Paul Maurice said Perreault was moving around and will be evaluated again on Monday.

Winnipeg went on to win the matchup 7-3 after strong offensive outings from Blake Wheeler and Mark Scheifele.

In 33 games so far this season, the 31-year-old Perreault has six goals and six assists for 12 points.

The Jets will be back in action Tuesday night against the Carolina Hurricanes.