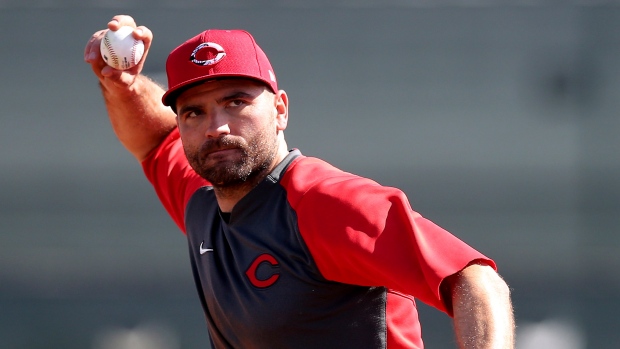 GOODYEAR, Ariz. — Joey Votto has no desire to rehash what he considers his worst season, which was also the sixth year in a row the Cincinnati Reds missed the playoffs with a losing record.

As for the moves the Reds made during the off-season, those energized the former NL MVP now going into his 14th season with the team.

“I was shocked for sure, and it seemed like it was one after the other. I was pleasantly surprised," Votto said. “Like anybody who has watched this team over the last little bit, I think we’re excited about being competitive throughout the entire year."

Votto was getting messages from friends this winter on what the Reds were doing while he took a self-imposed break from baseball activities — “I needed to just get away from baseball stuff for a while,” said the first baseman, who was still doing conditioning and other such training. His .261 batting average last year was his lowest in a full season, and he had only 15 homers and 47 RBIs in 142 games.

Meanwhile, the Reds were bolstering the everyday lineup around their longest-tenured player with the additions of outfielders Nick Castellanos, second baseman Mike Moustakas and Japanese outfielder Shogo Akiyama.

“He's in a really great place as far as being excited about how he's viewing this season for himself and our team," Reds manager David Bell said of Votto. “He's been around a long time, and he's been around a lot of different teams and he can recognize when we have got a great opportunity in front of us. And I know how much he wants to win."

At the start of the 2012 season, with two years still left on Votto's contract, Cincinnati added $225 million and 10 years through 2023, making it the longest guaranteed contract in major league history. There is even a club option for another season after that.

After the Reds made the post-season in 2012 and 2013, they haven't had a winning season in the first six years of that decade-long extension. Votto, who will turn 37 in September, is still due $107 million for the final four years left on the deal.

Votto's numbers only started to significantly slip the past two seasons.

While hitting a very respectable .284 in 2018, it was the first time in a decade that he was under .305 in a full season, and his 12 homers were his fewest in a full season. He still led the National League in on-base percentage (.417) for the third year in a row since he walked 108 times.

But along with another dip in the batting average last year, he walked only 76 times after four seasons in a row with more than 100. He had a career-low .357 OBP.

“Last year was the worst season of my career. I played poorly,” he said, not wanting to talk anymore about it.

“Joey is Joey. He's elite,” pitcher Trevor Bauer said. “Everyone has little kind of bumps in the road, or whatever."

Votto is the only player who has been with the Reds longer than catcher Tucker Barnhart, who made his big league debut in 2014.

Barnhart hasn't been part of a winning season with the Reds, and he too was surprised and excited about the off-season additions. He got to Arizona in late January, and Votto arrived only a few days after that.

“I expect a guy this year that's gonna be as good as he probably has ever been. He doesn't stop working,” Barnhart said. “And he's excited. I know he said it publicly that he's happy and he's excited to be a part of a winning team. And I think that that's going to echo throughout the entire clubhouse for sure. ”