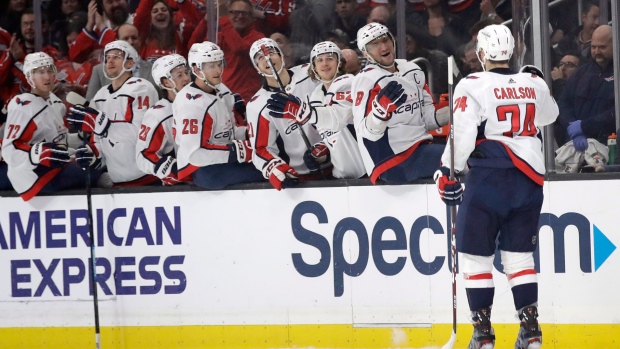 LOS ANGELES — “Johnny for Norris” is all the Washington Capitals can say inside their dressing room about the outstanding play of defenceman John Carlson.

If Carlson can keep up the pace of his prolific point production, everyone will know that phrase by season’s end.

“There’s nothing else to truly talk about,” Capitals forward T.J. Oshie said. “No, he’s definitely one of our leaders and carries a lot of weight in the back end playing in all situations, playing big minutes. A lot of talk about his points and his goals, which is amazing right now, but also how good he is defensively. He’s a solid rock back there and he gets the job done every night.”

With 11 goals and 31 assists through 30 games, Carlson suddenly finds himself alongside an elite group of defencemen in NHL history with his early output, tying Denis Potvin and Al MacInnis for second-most points to start a season. Only Bobby Orr had more, with a record-56 points in 1974-75 highlighting his five seasons with at least 42 points through 30 games.

Carlson got his 100th career goal by breaking out of his own zone before placing a shot over Jonathan Quick’s right shoulder from the right point to put Washington up 1-0 at 4:36 of the first. He is the fifth Capitals defenceman and the 13th American-born defenceman to reach the century mark.

Carlson made it 2-0 with 6 1/2 minutes left in the opening period, getting Quick to commit too early and scoring around the prone goalie.

“The guys, you know, like to give him a hard time about it, and lots of things have gone his way,” Capitals coach Todd Reirden said. “That being said, he’s earned it, he’s worked for it, he deserves it. It’s not just the offensive stuff. He’s blocking shots, playing rushes early. He’s doing it all obviously.”

Tom Wilson added an empty-netter at 18:41 of the third to give the Capitals a fifth straight win for the second time this season. They won six straight Oct. 25-Nov. 9. Ilya Samsonov stopped 22 shots.

Blake Lizotte had a goal and Quick made 19 saves for the Kings, who lost for the third time in their past 10 home games.

The Kings could have gone ahead 15 seconds into the game when Matt Roy tipped Tyler Toffoli’s shot and forced Samsonov to make a five-hole save. However, they quickly found themselves trading chances with the Capitals, and Carlson was there to strike for his third multi-goal game and 13th multi-point game of the season.

Los Angeles did dig in to establish the forecheck as the game went on and got to 2-1 at 3:20 of the third when Lizotte charged in off the bench and poked in a loose puck at the near post after Samsonov could not control it behind his own net.

Kings coach Todd McLellan liked how his team continued to fight, but the poor start was too much to overcome.

“And it’s admirable that our guys will do that and play to the end, but the beginning, there has to be a stronger belief system at the beginning,” McLellan said. “We’re struggling scoring goals right now, so mistakes are magnified, and they end up costing you wins.”

NOTES: Oshie had an assist to extend his point streak to four games. He has one goals and six assists in that span. … The Capitals are 7-0-3 against the Pacific Division. … Lars Eller had an assist for the second straight game. … Capitals C Nicklas Backstrom missed his seventh straight game because of an upper-body injury.

Kings: At Edmonton on Friday night.