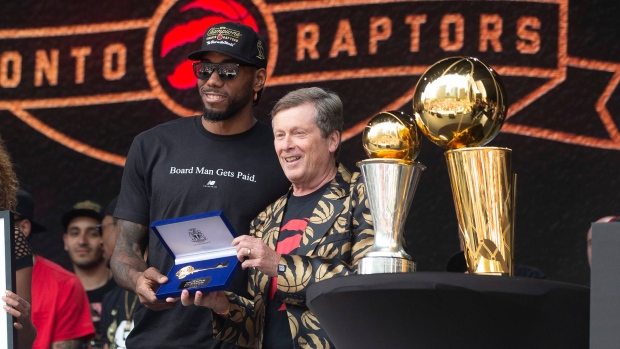 TORONTO — The city and its partners will review planning for the Raptors' victory parade that drew unprecedented crowds to the downtown, some of whom found themselves caught in a terrifying situation when gunfire erupted late in the proceedings, Toronto Mayor John Tory said on Tuesday.

Some experts were critical of the planning for a parade that ran hours late due to clogged roads on a route and ended at an overflowing square in front of city hall, where about a million people spent hours without ready access to water or washrooms — or a safe way to get out in an emergency.

Police acted fast to deal with the "scary moment" of gunfire, Tory said, as he denounced the "reckless actions" of those who took firearms to the celebration and praised organizers for their "extraordinary effort."

"This was a massive event, the likes of which our city has never seen before," said Tory, who had urged employers in the city to give their staff time off to show up for the celebration. "They had three days to plan this parade."

Brad Ross, a spokesman for the city, said the review led by the city's manager would look at all aspects of the event — among them the route, security and barriers used. Ross, too, said things went extremely well given the short planning time frame.

"We had from Thursday to plan fully," Ross said. "There were some discussions in advance of last Thursday, but couldn't get into nitty-gritty until they won."

Paul Wertheimer, head of Los Angeles-based consulting company Crowd Management Strategies, called it unfathomable that detailed planning only began after the Raptors clinched the championship. Contingency plans, he said, should have been in place since it became apparent that the team were serious contenders.

"It's not like a storm that came out of nowhere," Wertheimer said from Chicago on Tuesday. "You don't wait to the last minute. If you only have a few days to do it, you can't do it right."

One of the most important aspects of the plan, Wertheimer said, should have been to limit the number of people allowed into Nathan Phillips Square. Failure to do so, he said, leads to safety issues such as crowd crush and a lack of a way for people — who assume the event is being properly managed — to exit in an orderly and timely manner in an emergency.

Police and city estimates put the crowds downtown on Monday at somewhere between one million and two million people — probably a Canadian record. Apart from the four people wounded in the shooting, police and paramedics reported few other injuries or issues.

The city said Raptors owners, Maple Leaf Sports and Entertainment, was in charge of putting the event together.

"Pre-planning with the operations parties involved began at the start of the NBA Finals, with the plans being activated, of course, once the Raptors officially won," said company spokesman Dave Haggith. "We will be conducting debrief sessions with unified command and operations stakeholders to implement appropriate measures for future events of this scale."

Russ Simons, managing partner with Tennessee-based Venue Solutions Group, said it would have been difficult to predict the outsize crowd of rapturous fans who came out for the parade.

"It's obviously at its most extreme when you have a championship like the NBA Finals — especially for a franchise that's never had one before," Simmons said from Los Angeles. "I don't think that's something anybody could reasonably anticipate. That creates a cascading effect."

Keith Still, a professor of crowd science at Manchester Metropolitan University, said the parade's slow going due to crowding was appropriate.

"The last thing you want to do at these events is get heavy handed and start imposing crowd controls because that can create significantly more safety problems," Still said.

Still commended police for their handling of the shooting. Contrast that, he said, with the response to the London Bridge attack in 2017, when it took several hours to get to the injured.

—With a file from Liam Casey