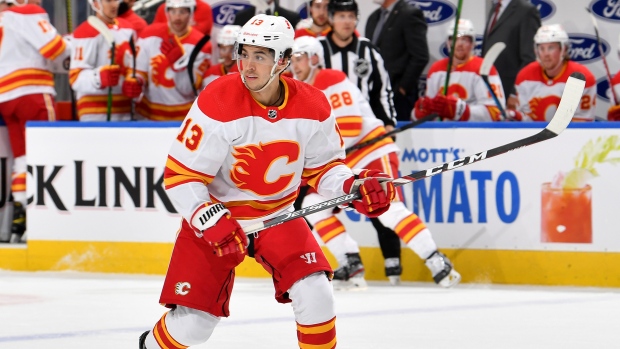 Johnny Gaudreau's focus right now is on the upcoming season and not a new contract.

A pending unrestricted free agent, the 28-year-old Calgary Flames winger is entering the final year of a six-year, $40.5 million deal and says he doesn't intend to talk about a contract this season.

Johnny Gaudreau on his status as a pending unrestricted free agent after this season:

"It's between my agent and Tre. I probably won't answer many questions about that this season."

"It's between my agent and [general manager Brad Treliving]," the five-time All-Star said on Thursday. "I probably won't answer many questions about that this season."

A native of Salem, NJ, Gaudreau was a fourth-round pick in the 2011 NHL Entry Draft out of the United States Hockey League's Dubuque Fighting Saints. In 2014, Gaudreau won the Hobey Baker Award as the nation's top collegiate hockey player while at Boston College. He is heading into his ninth NHL season, all spent with the Flames.

The Flames open up their exhibition schedule on Sunday when they host the Edmonton Oilers. The team kicks off their regular season campaign on Oct. 16 at the Oilers.