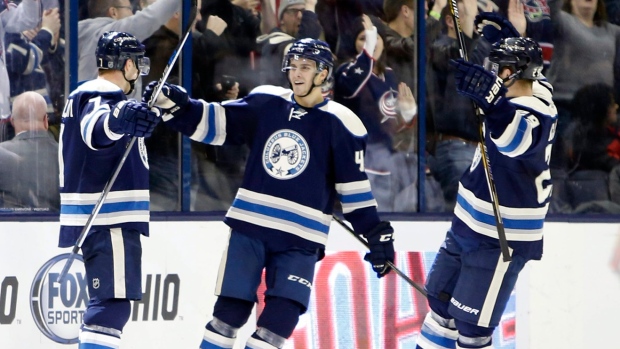 COLUMBUS, Ohio - In a season when the Columbus Blue Jackets have been on the wrong side of bad bounces and injuries to key players, one swing of defencemen Jack Johnson's stick against Colorado changed their luck — at least for one game.

Johnson scored with 1:07 left off Avalanche forward Cody McLeod's skate to give Columbus a 2-1 victory over Colorado on Saturday night.

Johnson fired the puck toward the net from near the blue line and it sailed through the air before McLeod redirected it past goaltender Calvin Pickard.

"You don't expect one like mine to go in, but it's better to be lucky than good sometimes," Johnson said.

Brandon Dubinsky slapped a shot past Pickard 58 seconds into the first for his ninth goal of the year.

The Avalanche tied it at 6:02 of the second on rookie forward Chris Wagner's fourth goal of the season. He redirected a shot by Jarome Iginla that trickled under the right leg of goaltender Joonas Korpisalo.

Korpisalo made 29 saves and got his third career victory. Pickard stopped 19 shots.

"I thought (Korpisalo), the past two games has been outstanding," Blue Jackets coach John Tortorella said. "He looked solid tonight. There were a lot of bodies around him, a lot of screened shots, he made a couple of great saves in the period."

Columbus missed a chance to regain the lead 8 minutes after Wagner's goal during a Colorado power play. The Jackets had a goal waved off when William Karlsson used his skate to push a pass from Cam Atkinson into the net. Karlsson swept his stick in an effort to touch the puck before it crossed the goal line, but the call stood upon review.

The Jackets failed to score during a third-period power play, with multiple opportunities turned away by Pickard.

Colorado's best chance to score in the period came when Nathan MacKinnon ripped a shot off the post during a power play, after referees whistled the Jackets for too many men on the ice at 10:07.

"I thought we dominated the third period," Wagner said. "Outshot them by a good margin, they had a pretty good bounce there at the end. (McLeod) was just trying to block the shot, it's unfortunate. Things happen I guess."

Colorado pulled Pickard after Johnson's score but failed to threaten Korpisalo in the final minute.

Columbus remains in last place despite the win but has won two straight after winning at Toronto on Wednesday night. Colorado had won four of its last six to move into the final wild-card spot in the Western Conference, but what Tortorella described as Johnson's "lucky bounce" was enough for Columbus to secure the win Saturday.

"Feels good to have one of those go our way," Dubinsky said. "Feels like it's been one of those years where we haven't had many bounces or calls. It's nice to get a bouncer like that, a seeing eye shot that finds the back of the net and get us a win."

Columbus finished 0 for 3 on the power play. Center Boone Jenner was called for two penalties — once for interference in the first and then high sticking in the second.

NOTES: Jackets goalie Sergei Bobrovsky dressed and backed up Korpisalo but did not play after returning from a groin injury. ... Bobrovsky has not played since Dec. 8. ... Blue Jackets captain Nick Foligno missed his fourth straight game with an upper-body injury.