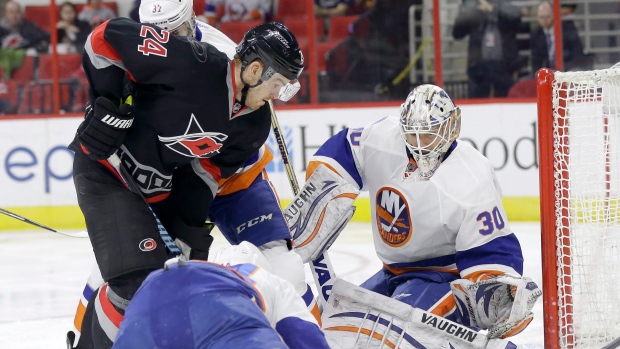 RALEIGH, N.C. - After a downer of a finish the previous night, there was no carry-over for the New York Islanders.

Twenty-four hours after yielding three third-period goals and giving up three two-goal leads in a 6-5 loss to the rival Rangers, the Islanders skated past the Carolina Hurricanes 4-1.

In a meeting between the first- and last-place teams in the Metropolitan Division, New York got 37 saves from backup goalie Chad Johnson and goals from four players, including one from Michael Grabner, making his return to the lineup in an injury-filled season.

Although neither Grabner nor Johnson took the ice in the loss to the Rangers, both said they were eager to get back on the winning side.

"I don't think you want to get in a spiral, losing two, three four in a row," said Grabner, who's missed 40 of his team's first 58 games. "It's nice to get back the two points, put that behind us and move on."

Grabner's third-period breakaway gave the Islanders a 3-0 lead and was more than enough for Johnson, who last won Jan. 10 against Columbus. He is 2-0 this season against Carolina.

"He made some great saves," Grabner said. "We gave up a lot of shots, and he bailed us out a lot of times."

"This is where you can sort of build your identity as a team and show your true character," Johnson said. "When you have a high-energy game like we had (Monday night), it's tough to play back-to-back. But I think tonight, we really regrouped and stuck to our game plan and got a good result."

Anders Lee, Brock Nelson, Grabner and John Tavares scored for the Islanders, who improved to 19-3 against the Metro Division behind Lee's 19th goal of the season, Nelson's 16th and Grabner's sixth.

Carolina, coming off a 6-3 win at Ottawa, outshot New York 18-8 in the second period and 38-30 overall, but couldn't dent Johnson until Jiri Tlusty's goal with 8:46 remaining.

Tavares scored his 28th of the season on an empty net with 4:19 remaining.

The Islanders outshot the Hurricanes 14-7 in the first period and easily could have had more than a one-goal lead. New York hit the post twice — Nelson and Grabner — before breaking through against Anton Khudobin on a power play late in the period.

Lee grabbed his rebound in front and poked the puck through the legs of Khudobin with 2:54 left. The Hurricanes entered the game with the league's No. 2 penalty kill (87.8 per cent), but against the Islanders this season they allowed four goals on their first nine penalties.

Jay McClement hit the post for Carolina in the first period from close range, but the Hurricanes got little pressure on Johnson.

"We didn't execute when we had some rushes," Carolina coach Bill Peters said. "We had a 3-on-2 and a 4-on-2 that didn't materialize into anything, so those hurt you."

Notes: Frans Nielsen had two assists for the Islanders. . Johnson started in place of No. 1 goalie Jaroslav Halak, who gave up three goals in the final 15 minutes of the loss to the Rangers. . Neither team had a morning skate after playing Monday night, although icy roads in Raleigh likely played a role in the decision not to practice. . The Islanders are 7-3 on the front end of back-to-back games, and 8-2 on the second end. They have six more sets of back-to-back games this season. . This was the teams' third of four scheduled meetings. The Islanders won a back-to-back set to open the season in October, 5-3 in Raleigh and 4-3 in Uniondale.