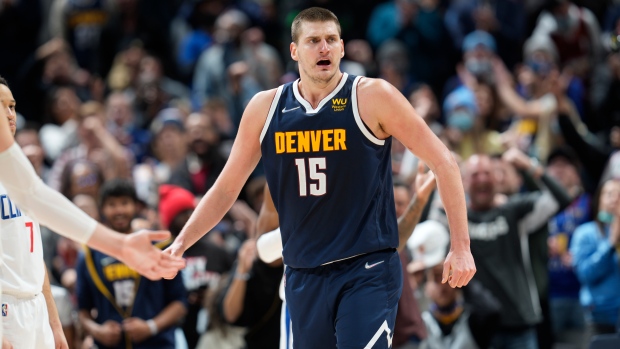 DENVER (AP) — Nikola Jokic had 49 points, 14 rebounds and fed Aaron Gordon for a tiebreaking 3-pointer with 1.9 seconds left in overtime for his 10th assist, giving the Denver Nuggets a 130-128 victory over the Los Angles Clippers on Wednesday night.

Jokic drew a double-team, then whipped a pass across the court into the left corner. Gordon made his fourth 3 of the game to give him 28 points and Jokic his third straight triple-double and 10th of the season.

Nuggets reserve Devon Reed came onto the floor after the Gordon basket and received a technical foul. After Luke Kennard hit the free throw, Reggie Jackson's long 3-pointer bounced off the glass and rim at the buzzer.

Monte Morris added 19 points, nine rebounds and nine assists as the Nuggets won for the third time in four games.

Ivica Zubac had a career-high 32 points and added 10 rebounds. Jackson had 28 points and 12 assists as the Clippers lost their second straight to kick off an NBA season-high, eight-game road trip.

It led to a frantic finish. After Will Barton's driving layup with 26 seconds left in regulation tied it for the Nuggets, the Clippers couldn't get a shot off before the 24-second clock expired. But Jokic's fadeaway at the buzzer was an airball.

Jokic got an assist from his coach that may have kept him around for the finish.

His follow shot tied the game at 72 with 4:40 left in the third, but he immediately picked up a technical foul for barking at the referee under the basket. He began to charge at the official, but Michael Malone ran onto the court, restrained Jokic and he avoided a second technical.

Jokic, who has complained that he doesn't get enough foul calls for much of the season, stayed in the game and finished 14 of 16 from the foul line.

The Nuggets played hours after making official the three-way trade in which they acquired shooting guard Bryn Forbes from San Antonio. Injured players Bol Bol and P.J. Dozier went to Boston in the deal.

Dozier, a career 41.3% 3-point shooter, will give Denver needed outside shooting. He could play as soon as Friday.

The Nuggets needed him in the second quarter, when their maligned bench was on the floor at the start of the Clippers' 21-2 run. The spurt continued when the starters returned, as Jokic missed his first six shots of the period before his bucket cut it to 59-47 at halftime.

The Clippers frustrated Jokic last week with constant double-teams. This time, Zubac went at him defensively, hitting 15 of 19 shots.

Nuggets: Jamal Murray (knee surgery) and Michael Porter Jr. (back surgery) continued to ramp up their pregame shooting drills before the game. Both hope to return this season. ... G Austin Rivers (non-COVID illness) returned after a two-game absence.

Zubac avoided fouling out with 1:02 left in regulation when the Clippers won a replay challenge. Zubac had been called for a foul on Jokic. The Nuggets won the ensuing jump ball and Jokic's driving layup tied it.

Malone was hesitant to confirm that Forbes would play Friday. The Nuggets thought they had a deal to send Bol to Detroit rescinded when Bol failed a physical.

Clippers: At Philadelphia on Friday night.