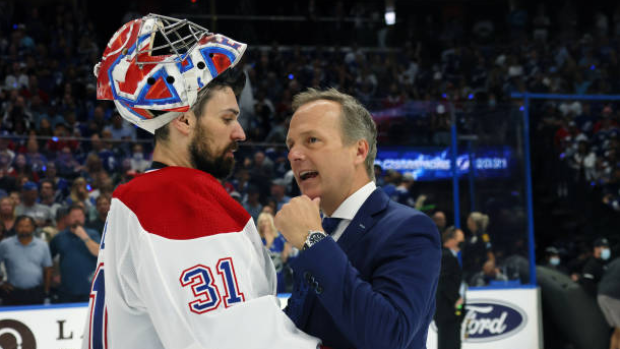 CALGARY — If NHL players are able to participate at the upcoming Beijing Olympics — and that remains a big "if" — Canada will have a two-time Stanley Cup champion behind its bench.

Cooper, from Prince George, B.C., led the Lightning to their second straight Stanley Cup title last month when they defeated the Montreal Canadiens in five games.

He previously served as head coach of Team Canada at the 2017 IIHF World Championship, winning a silver medal, and was an assistant coach with Team North America at the 2016 World Cup of Hockey.

"It's the Olympic Games. I get fired up just talking about it," Cooper said during a virtual news conference.

"(For) the young kid that used to go down in his basement and fire pucks into the dryer for years on end, after watching games on Hockey Night in Canada' ... It's surreal to be in this spot."

Less than six months out from the beginning of the Games in February, it's still not clear whether the world's biggest hockey stars will participate. NHL players did not participate in the 2018 Pyeongchang Games after taking part in five straight Olympics.

Canada won gold in three of those, with Pat Quinn leading the team to the top of the podium at the 2002 Salt Lake City Games, and Mike Babcock doing the same at the Vancouver Olympics in 2010 and the Sochi Games in 2014.

The schedule for the upcoming NHL season leaves room for an Olympic break, but the league has said no final decision has been made.

The NHL has agreed to pause play between Feb. 7 and 22, 2022, but notes talks are ongoing between the NHL Players' Association and the International Ice Hockey Federation about whether its athletes will compete in Beijing.

The league has said if players don't participate, a revised schedule will be released.

During Monday's news conference, Hockey Canada CEO Tom Renney noted it could be "an 11th-hour decision" whether NHL players — and coaches — will be able to go to Beijing, but said the organization wanted to be ready either way.

"The fact of the matter is we felt it more than necessary to identify Coop and his coaching staff to make sure that we were ready if and when the time comes," Renney said.

"We have every expectation and desire to participate with National Hockey League players. That being said ... we'll be ready to go if in fact it requires a Plan B."

This report by The Canadian Press was first published Aug. 9, 2021.