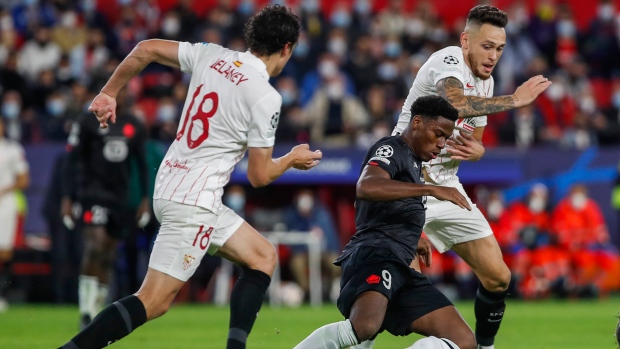 SEVILLE, Spain (AP) — Lille earned its first Champions League win of the season, coming from behind to beat Sevilla 2-1 on Tuesday and staying in contention to advance to the knockout rounds from a tight Group G.

Lucas Ocampos put the hosts ahead early in the first half but Jonathan David equalized by converting a penalty kick before halftime.

Jonathan Ikoné netted the winner for the French side early in the second half.

"It was a solid performance, one with team spirit,” Lille captain José Fonte said. “At the end, the most important thing is the three points. We haven’t lost our quality, it’s there even if we’ve had a tough start to the season.”

Sevilla, which was also seeking its first win in the European competition this season, next hosts Wolfsburg, while Lille welcomes Salzburg.

Sevilla had drawn 0-0 with Lille in France in their previous Champions League match.

“We started well, playing better,” Sevilla coach Julen Lopetegui said. “After the penalty we lost our calm, and after their second goal we couldn't recompose ourselves.”

Sevilla struck first with Ocampos scoring from close range in the 15th. The visitors equalized with David converting a 43rd-minute penalty kick after a foul away from the ball by defender Thomas Delaney on forward Jonathan Bamba. The penalty was awarded after video review.

Lille, which had never won in Spain, took the lead in the 51st with a shot by Ikoné after the Sevilla defense missed consecutive chances to clear the ball from the box.

Ikoné had already come close to giving Lille the lead in a breakaway in first-half injury time, but his shot in front of the goal was blocked by Sevilla goalkeeper Yassine Bono.

“Tonight we showed we were hungry," Ikoné said. “We gave our all, and we gave up on nothing. We managed to come back into the game, and get a second goal. We believed we could go through from the start. We now have to go for it and not give up.”

Lille opened its campaign with a scoreless draw at home against Wolfsburg before losing 2-1 at Salzburg. Sevilla had drawn 1-1 at home against Salzburg in a match with four penalty kicks, a record in the Champions League. It drew 1-1 at Wolfsburg.