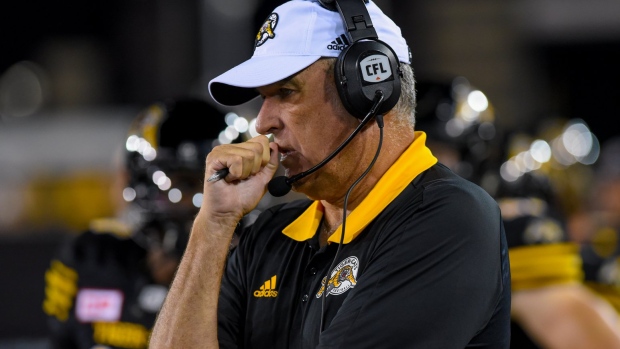 The announcement came during a bye week for the Tiger-Cats, who have struggled to an 0-8 start this season.

"I really believe that this is the best decision right now for the organization," Austin said at a media availability at Tim Hortons Field. "We'll all harness our different skills and aptitude to right the ship."

Jones, who was hired by the club three weeks ago, has 34 years of coaching experience at the NCAA, CFL and NFL levels, though this is his first head coaching job in the CFL. He was scheduled to hold a media availability Friday morning.

Austin was in his fifth season as Hamilton's head coach. Since guiding the Tiger-Cats to a second straight Grey Cup appearance in 2014, he had gone 17-27.

He said he'd been seriously considering stepping down as coach for the last two or three weeks, and made the final decision Wednesday.

"This was a decision that wasn't made lightly and was under a lot of deliberation, and trying to be as self-aware as possible to do the right thing for the organization," Austin said. "I will always make those decisions with that as the backdrop."

The Tiger-Cats are last in the league with 148 points scored and 310 points against.

A low point came last month in a 60-1 blowout loss to Calgary. It was Hamilton's second largest margin of defeat in club history.

Hamilton's next game is Labour Day against the visiting Toronto Argonauts.

"June is very capable, he has a great track record," Austin said. "I've established a really good relationship with him over the last two or three weeks. He'll do a wonderful job."

This isn't the first time Austin has shed one of his titles with the Tiger-Cats.

He also held the general manager position when he joined the team in December 2012, but he eventually relinquished it to Eric Tillman in March 2016.

"I'm excited about focusing my energy in an area that will have a real positive impact on effecting change for this organization, for our players, and for the staff that's here across the board, both on the business side and on the football side," Austin said.

"That's why the decision was made."

Austin spent 10 seasons as a CFL quarterback (1987-96) before moving into the coaching ranks. He was named coach of the year in 2007 after leading the Saskatchewan Roughriders to a Grey Cup victory and spent five years in the NCAA before returning north of the border.