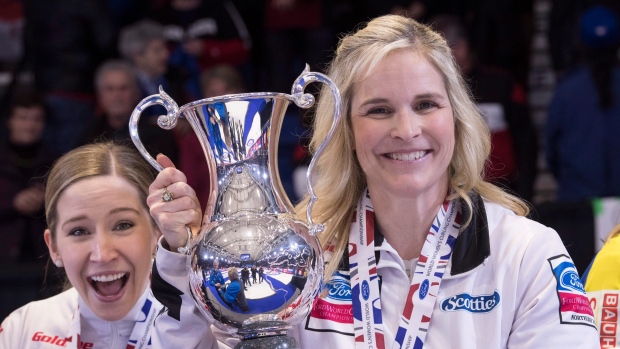 Jones scored a single in an extra end for the victory. Hasselborg tried to pick out a stone on the four-foot ring with her last throw but missed it completely.

Canada ran the table in the 12-game round-robin and edged American Jamie Sinclair in the semifinal.

With the game tied 4-4 in the ninth end and two stones close to the pin, Jones threw a runback to score two for the lead. But Hasselborg responded with a run double for a pair to force an extra end.

Hasselborg won Olympic gold last month at the Pyeongchang Games. Jones, who is a whisker ahead of No. 2 Hasselborg in the world rankings, won the 2014 Olympic title in Sochi.

The teams felt each other out over three blank ends at the start. Hasselborg missed a freeze attempt in the fourth and Jones drew the four-foot ring for a 2-0 lead.

Hasselborg made a short runback to sit three and Jones could only clear one stone out. The Swedish skip drew the eight-foot to take the lead.

Sweden kept the pressure on in the sixth end as Canada had hammer. However, Hasselborg's final stone appeared to pick halfway down the sheet and Jones followed with a takeout for a 4-3 lead.

The lively sellout crowd of 3,919 did its best to provide a boost for the host side. The Canadians built on their momentum by forcing Sweden to a single in the seventh end and a blank followed in the eighth.

Earlier in the day, Victoria Moiseeva won bronze after making a game-winning draw for two to give Russia a 6-5 win over the United States.

Sinclair was a touch heavy with her final draw and Russia used hammer to its advantage. Moiseeva went for the win knowing that she'd force an extra end if she missed.

"Every skip wants to finish with that kind of shot," Moiseeva said. "If you make it."

Sinclair, a dual citizen who grew up in Manotick, Ont., had great draw weight through the competition and was confident settling into the hack for her last stone.

"I thought I threw it pretty well," she said. "I thought it was a touch heavy out of hand but I knew I could be back four-foot. But it just kept gliding."

After a tentative first half, Moiseeva was light on her draw in the sixth end to give the Americans a steal and a 3-2 lead. A blank was followed by a Russian pair in the eighth end and Sinclair answered with a deuce in the ninth.

Overall attendance at the nine-day competition was 69,391. A 13th team was added to the field this year and a six-team playoff format was used.

Officer recently announced she is stepping away from competitive curling at the end of the season. She'll be replaced next season by Jocelyn Peterman.

Ottawa's Rachel Homan ran the table en route to winning gold last year in Beijing. Homan represented Canada at the Pyeongchang Games but did not reach the podium.

Sweden went 10-2 in round-robin play to earn the second seed. Hasselborg beat Russia in the semifinals.

Sweden's Anette Norberg is the only women's skip to win Olympic and world titles in the same season. She accomplished the double in 2006.

Canada has won a leading 17 gold medals since the inaugural world women's championship in 1979. Sweden is next with eight titles.

The 2019 world playdowns will be held next March in Silkeborg, Denmark.