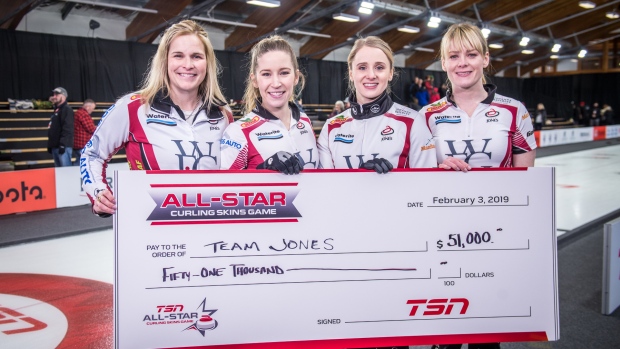 “It was a very close game. You always know it's going to come down to that last end, and you've got to win it. We didn't really want to steal in seven, if we could [avoid it], because at the end of the day we wanted the last rock in the last end,” Jones told TSN after the match. “I felt like we made some good shots when we had to. All in all, I was pretty happy with how we performed. It's such a fun event, and we just love playing in it. It feels great to come out on top."

Jones led off the game with the hammer and took the first $2,000 skin with a difficult pick to score two. A miss by Fleury on a routine shot meant Jones went up by $4,000 with a steal in the second.

Fleury rebounded in the next end with a skillful triple raise takeout to set up the $3,000 skin.

Fleury took control of the game with back-to-back steals in the fourth and fifth, first when Jones couldn't execute the raise angle double takeout, and then by forcing Jones into a tough straight back raise takeout that over-curled just slightly.

With Fleury up $10,000 to $4000, Team Jones responded when Kaitlyn Lawes made a spectacular straight back raise double to set up Jones for a delicate tap to score two and tie the game.

In the end, Jones forced Fleury to attempt a difficult hit and roll that didn't quite curl enough, sealing the victory, a third straight Skins Game title, and a $51,000 payday for Team Jones.

Despite coming up short, Fleury was pleased with how her team performed overall at the event.

"It was a really exciting final. A back and forth game with a lot of rocks in play,” said Fleury. “I think we kept up with them. The last end got a little messy for us, but overall we're happy with how we played. We really enjoyed the whole experience here in Banff, and the skins format was a lot of fun for us. We'll practice hard these next two weeks, and we'll be ready for the Scotties."

The Manitoba-based teams now turn their sights to the Scotties Tournament of Hearts which kicks off on Feb. 15 from Sydney, Nova.