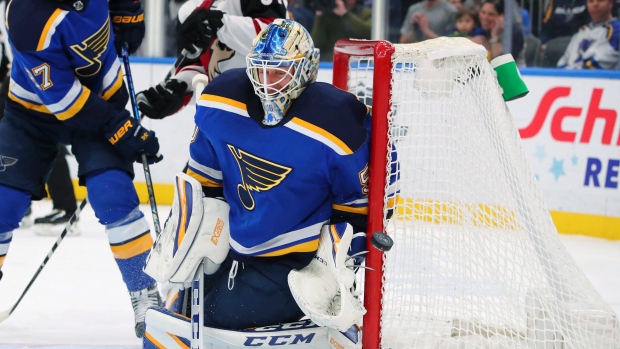 ST. LOUIS — Jordan Binnington had a light night in net for the St. Louis Blues, yet he couldn't relax, even as his teammates peppered Antti Raanta with shots.

Ryan O’Reilly scored and Binnington made 14 saves to lead the Blues to a 1-0 win over the Arizona Coyotes on Thursday night.

“It's kind of the game inside the game as a goalie,” Binnington said about staying focused. “It's your job to be there when the team needs you. I just tried to do that and be prepared if anything came my way.”

Binnington recorded his second consecutive shutout and the eighth of his career. He had allowed at least three goals in eight straight starts prior to his shutout performances.

He improved to 26-11-7 on the season and became just the 10th goaltender in NHL history to reach 50 career wins in 77 or fewer games.

“He's so calm no matter what situation it is," O'Reilly said. "I think that gives us a lot of confidence on the bench too, that we know that he's there and he's going to make those saves.”

Raanta stopped 45 of the Blues' season-high 46 shots on goal and fell to 13-14-13 as the Coyotes lost by one goal on both legs of back-to-back games.

“You could just tell some guys were really tired,” Arizona coach Rick Tocchet said. “We hung in there. Raanta was unreal tonight. He gave us a chance.”

O’Reilly scored on the Blues' 43rd shot, a backhander with eight minutes remaining in the third period that caromed off the goal post, hit Raanta in the back, and bounced into the goal. The goal was O’Reilly’s 11th of the season and just his third at home.

“When you're just throwing everything at them, sometimes it's not the quality of the shots that matter, so it's kind of turning it into let's get it in and let's hold on to the puck,” O'Reilly said. “They were letting us have the perimeter a lot there, so it was kind of not panicking."

St. Louis outshot Arizona 28-12 through the first two periods, including 19-4 in the second.

“It was very tough to generate any offence tonight," Coyotes centre Christian Dvorak said. “Raanta was very good for us. We could have gotten run out of the building.”

David Perron appeared to have scored his team-leading 24th goal of the season on a slap shot from the left faceoff circle 9:52 into the second period. However, Tocchet successfully challenged that Jaden Schwartz entered the zone offside, negating the goal.

“It was offside by quite a bit,” Berube said. “We knew right away.”

Arizona was unable to convert on a 53-second, two-man advantage 9:38 into the first period, when Oskar Sundqvist was called for slashing with Justin Faulk already in the penalty box.

Blues D Marco Scandella made his debut with the team after being acquired Tuesday from Montreal for a pair of draft picks. … St. Louis has won back-to-back games for the first time since winning four straight from Jan. 7 through Jan. 13. … Arizona was shut out for the fifth time this season. … Arizona allowed at least 40 shots on goal for the fourth time this season.

Coyotes: Host Tampa Bay on Saturday in the opener of a three-game homestand.

Blues: At Dallas on Friday night in first of a two-game trip.