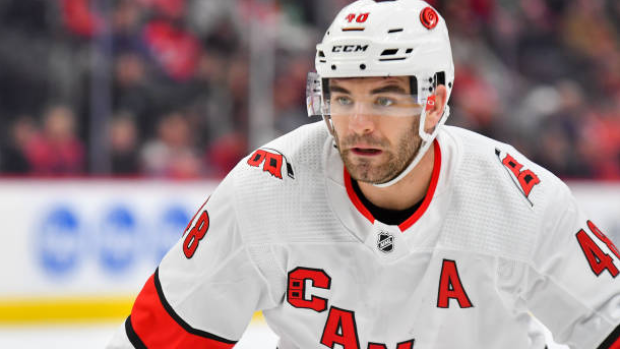 Martinook told members of the media on a zoom call that, as the team's player representative on the NHL Players' Association’s executive board, he voted against the proposal.

Martinook said Canes did not favor having to play an extra playoff round but are "fine" with the approved format and are eager to play more hockey. "We're fully prepared with what we've got on the board."

The executive board voted Friday to authorize further negotiations with the NHL on the proposed 24-team format to award the Stanley Cup in 2020. Several details “remain to be negotiated” and an agreement on the format would “still be subject to the parties reaching agreement on all issues relevant to resuming play,” according to a statement released by the NHLPA.

At least 18 affirmative votes were required from representatives of the 31 teams.

The details of the 24-team proposal were circulated on Thursday, including a round-robin format for the top four teams in each conference to go along with eight play-in series to determine the 16 playoff participants.

Martinook voiced his concerns on the format last Wednesday.

“I feel like if you’re doing the 24-team thing, it basically gives a team a chance that had no chance of making it, which if you play 82 there’s maybe 6, 8% chance that the team in 12th place (in the conference) makes it,” Martinook told the Associated Press. “Nobody’s ever seen this before, but at the end of the day, the Stanley Cup Playoffs are 16 teams, seven games a series.”

The Hurricanes, who were in the top wild-card spot in the Eastern Conference when the season was paused on March 12, would face the New York Rangers in a best-of-five series for a playoff spot under the proposal.