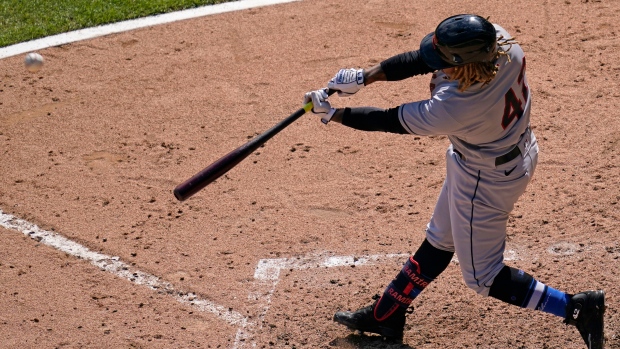 CHICAGO — Slumping José Ramírez connected for a go-ahead, two-run homer off Lance Lynn in the sixth inning and the Cleveland Indians bounced back from being no-hit, beating the Chicago White Sox 4-2 on Thursday.

After Carlos Rodón just missed a perfect game Wednesday night, there was a different kind of tension this time as the benches emptied in the bottom of the first.

Adam Eaton singled and tried to advance when Indians right fielder Josh Naylor threw to third, hoping to get the lead runner. Eaton arrived ahead of the throw back to second, but was called out when his hand came off the bag while shortstop Andrés Giménez stood his ground and held the tag.

Eaton grabbed Giménez’s leg, began barking and then pushed Giménez in the chest with two hands. Indians starter Aaron Civale plunked Eaton with a pitch in the upper arm in the third.

Civale (3-0) allowed only a run — in the first — and five hits through six innings in his third straight strong start. Nick Wittgren and James Karinchak followed with a scoreless inning each. Emmanuel Clase allowed an unearned run in the ninth, but got his his third save.

Lynn (1-1) permitted his first two earned runs this season on five hits through six innings, while striking out 10 and walking none.

MINNEAPOLIS (AP) — Max Kepler’s RBI single in the bottom of the ninth inning stopped a five-game losing streak for Minnesota and broke a nine-game winning streak for Boston.

The Red Sox, who tied it in the eighth on Alex Verdugo’s three-run double, were on their longest winning streak since a 10-game run in 2018.

Luis Arraez opened the Minnesota ninth with his fourth hit, a single off Adam Ottavino (1-1), and Jorge Polanco was hit by a pitch.

After Nelson Cruz struck out, Kepler came through with his hit to shallow centre, helping the Twins avoid a four-game sweep.

Alex Colomé (1-1) pitched a scoreless ninth for the victory.

The Braves recovered after blowing a 5-4 lead in the top of the ninth. Garrett Cooper singled to put Miami ahead.

Ozzie Albies walked to force in a run before Swanson singled to left. The Marlins were trying for their first four-game sweep over the Braves.

BALTIMORE (AP) — Mitch Haniger became the first Seattle player to homer out of the leadoff spot in both ends of a doubleheader, hitting a tiebreaking drive in the second game that led the Mariners to a sweep of Baltimore.

Haniger’s fifth-inning homer to left-centre off Bruce Zimmermann (1-1) broke a 1-all tie and gave him four home runs this season.

J.P. Crawford hit a tiebreaking, two-run double in the sixth inning that lifted Seattle to a 4-2 win in the opener.

Seattle won three of four from Baltimore and has won five of its last six.

Keynan Middleton pitched the seventh for his second save in as many attempts, finishing a three-hitter.

In the first game, Crawford hit a go-ahead two-run double off Tanner Scott (0-2).

Marco Gonzales (1-1) yielded Trey Mancini’s two-run homer in the first, but settled down to retire 13 of his last 14 batters. He gave up two runs and three hits in five innings while striking out five. Kendall Graveman pitched a perfect seventh for his second save to cap a four-hitter.

Machado took Mitch Keller (1-2) deep with a two-run shot down the left-field line during San Diego's four-run first. Hosmer added a two-run single in the second as the Padres earned a split of the four-game series.

Chris Paddack (1-1) got through five innings, and Craig Stammen worked three innings to pick up just the sixth save of his 12-year big league career and first since 2019.

An announced crowd of 6,666 booed as Washington dropped to 3-7. The Nationals, who dealt with a COVID-19 outbreak earlier this month, have yet to win consecutive games.

Corbin owns an 0-2 record and a 21.32 ERA after allowing nine earned runs while getting merely six outs against the Diamondbacks (5-8), an outing that included a pair of hit batters, a trio of homers and a quartet of walks.

It was 3-0 after the top of the first, and while the Nationals went up 4-3 after the bottom half against Merrill Kelly (1-2), thanks in part to Starlin Castro’s two-run shot, the Diamondbacks piled on in the second.

KANSAS CITY, Mo. (AP) — Jakob Junis ran his consecutive scoreless streak to 14 innings as Kansas City staked him to a seven-run lead Thursday, and a shaky bullpen held on after giving most of it back to beat Toronto.

Junis (1-0) was charged with two runs on five hits and a walk while pitching into the sixth, but both runs scored with reliever Jake Newberry on the mound.

Kyle Zimmer gave up a run, and Scott Barlow put two on with one out in the ninth before getting Bo Bichette to pop out and striking out Vladimir Guerrero Jr. for his first save.

Guerrero finished a triple shy of the cycle for the Blue Jays. The highlight for them was his two-out homer in the seventh that soared over the fountains in left field and landed an estimated 456 feet from home plate.

Garcia drove a 1-2 pitch from Cody Reed (0-1) the other way into the right-field stands. Nick Solak and Charlie Culberson also homered for the Rangers, who have won three straight following a four-game losing streak.

Josh Sborz (1-0) pitched a scoreless inning, and Ian Kennedy finished up for his third save in three opportunities.

Mike Brosseau homered for the Rays, who went 3 for 13 with runners in scoring position and stranded 12 overall.