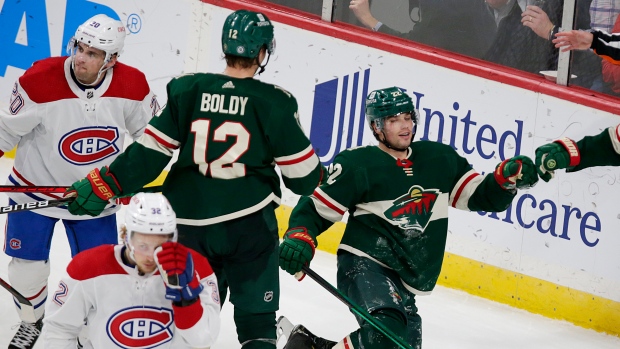 The Montreal Canadiens' three-game point streak came to an abrupt halt Monday in an 8-2 loss to the Minnesota Wild.

Canadiens winger Josh Anderson said there were no positives to be taken from the game, in which Montreal was outshot 39-21. Cayden Primeau allowed five goals over two periods and Michael McNiven allowed an additional three in the third.

"Throw that one right out the window," Anderson said. "Obviously, every single guy in that locker room knows we need (to be) better. I know it's been a long road trip and whatnot, and for the last three games, I thought, you know, that our game was there. We were finding ways to get a point and coming together. I know that we've been giving up a lot of scoring chances, but tonight there's no exception. You got to find a way even when you're tired and things like that, and we just left both our goalies out to dry."

Monday marked the Canadiens 10th and final game of their current road trip, which began on Dec. 28 against the Tampa Bay Lightning. Montreal went 1-5-4 on the trip and currently sit last in the NHL standings, one point back of the Arizona Coyotes.

"We need to really be having everyone at the top of their game to give ourselves a chance, and tonight we didn't have that," Canadiens head coach Dominique Ducharme said of Monday's loss. " They were much better than us."

The Canadiens are set to begin an eight-game homestand on Thursday against the Anaheim Ducks, though the Bell Centre will remain without fans due to capacity limits in Quebec.