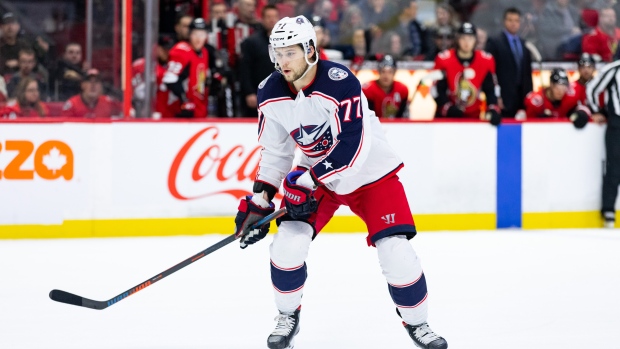 The Montreal Canadiens acquired forward Josh Anderson from the Columbus Blue Jackets in exchange for Max Domi and a third-round pick on Tuesday, and Anderson told reporters in his introductory conference call that he’s open to staying in Montreal for the long haul.

If the two sides can come together on a long-term extension, that is.

"If a long-term contract is available in Montreal, I would be more than happy to work with them on that,” he said.

Anderson, a restricted free agent, has his arbitration rights this off-season. TSN Hockey Insider Pierre LeBrun notes that if he chooses to go that path, it would trigger a one-year deal and make him an unrestricted free agent after the 2020-21 season.

LeBrun also reports that Montreal has already reached out to begin contract talks with their new forward and those should begin in the next few days.

While Anderson only became a member of the Habs on Tuesday, LeBrun reports Montreal has had their eye on him for some time. The Canadiens have been after him for a year and a half and tried to pry him away from Columbus this past trade deadline, but the Blue Jackets were not ready to deal him.

The Burlington, Ont., native played in just 26 games last season and has not played since March 2 after having shoulder surgery. He told reporters Wednesday that issue is behind him.

"My shoulder is 100 per cent stable. I've spoken to a lot of guys who had torn labrums in the past, and they've said that shoulder feels stronger than the other one."

Anderson added he thinks he would have been ready to play in the second round of the playoffs had the Blue Jackets advanced.