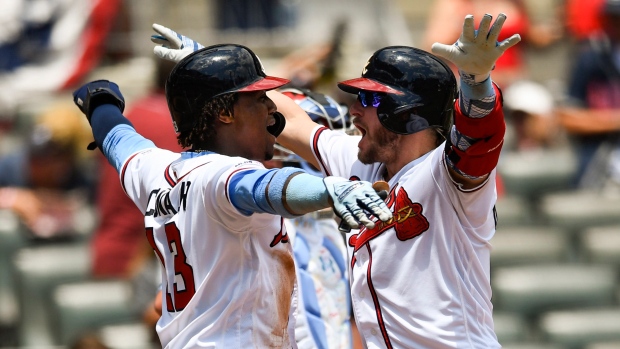 ATLANTA — Josh Donaldson homered for the third straight game, Mike Foltynewicz allowed only one run in six innings and the Atlanta Braves beat the Philadelphia Phillies 15-1 on Sunday to win the three-game series and solidify their NL East lead.

Donaldson's two-run homer in the third off Cole Irvin gave the Braves a 5-0 lead. Donaldson had three hits for the second straight game.

The Braves piled on with five runs in the seventh, when Tyler Flowers hit a two-run homer and Ronald Acuña Jr. also homered off Jerad Eickhoff. Atlanta outhit Philadelphia 19-6.

The Braves, who had their eight-game winning streak snapped with a 6-5 loss to the Phillies on Saturday night, won two of three in the series. Atlanta leads Philadelphia by 2 1/2 games in the NL East.

Foltynewicz (2-5) walked five batters but allowed only four hits with six strikeouts. He entered the game with a 6.02 ERA, including a 6.75 mark in his past three starts.

Vince Velasquez (2-4) lasted 2 1/3 innings in his first start since May 6. The right-hander allowed four runs and four hits. Irvin, the left-hander recalled from Triple-A Lehigh Valley before the game, gave up six runs in 3 2/3 innings.

The Phillies loaded the bases but couldn't score in the second. Foltynewicz gave up a single to Velasquez before walking Jean Segura and Bryce Harper, but Scott Kingery's fly ball to centre field ended the inning.

Atlanta led 7-0 before Harper's run-scoring single to left field gave Philadelphia its first run in the fifth. Austin Riley bobbled the ball in left field, allowing Harper to advance to second. Irvin, who walked, was held at third base. Foltynewicz recovered by striking out Kingery and Rhys Hoskins to strand the runners on second and third.

Phillies: OF Jay Bruce was held out with left hamstring tightness. Bruce is not expected to miss significant time. ... C J.T. Realmuto also was left out of the starting lineup. He left Saturday night's game feeling nauseous after hit by a foul tip in his groin area.

Braves: LHP Sean Newcomb is expected to avoid the IL after being hit on the back of the head by Realmuto's line drive and knocked out of Saturday night's game. Newcomb had no concussion symptoms on Sunday. He is expected to return to the bullpen following the spot start.

In addition to recalling Irvin, the Phillies activated right-hander Pat Neshek from the injured list. Neshek was placed on the injured list on May 25 with a right shoulder strain. Right-hander Edgar Garcia and left-hander Ranger Suarez were optioned to Triple-A Lehigh Valley.