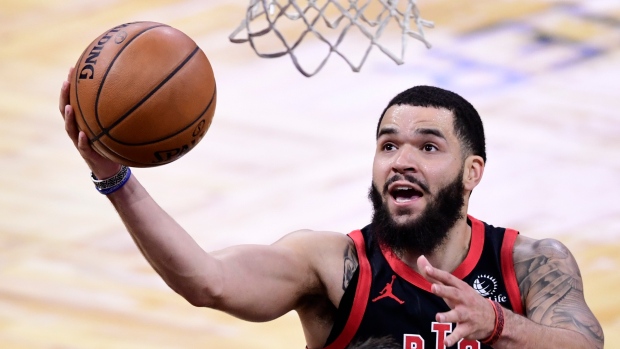 TORONTO – Like the NBA’s other 29 head coaches, Nick Nurse received his all-star ballot late last week, but with his team playing three games in four nights he waited until just before Monday’s noon deadline to submit his selections, and he’s hoping that he wasn’t the only one who procrastinated.

Toronto has sent at least one player to the league’s annual mid-season showcase every year since 2014, but after a slow start to the campaign, and with the depth of talent in the Eastern Conference, that streak is in jeopardy.

Kyle Lowry, who has been an all-star in each of the past six seasons, and Pascal Siakam, who made it for the first time last year, could each collect votes, but if a Raptor is going to get in, Fred VanVleet would seem to be the most likely candidate.

The 26-year-old point guard is putting together a compelling resume. He’s averaging a career-best 20.1 points, he’s appeared in every game this season and ranks third in the league in minutes played, he has continued to establish himself as one of the premier defenders at his position – leading the association in steals and deflections, and he’s got a 54-point performance to his name.

If any of the coaches were still on the fence Sunday evening, VanVleet wasn’t done making his case.

“I thought he looked like an all-star tonight,” Nurse said, following his club’s 110-103 win over Philadelphia, a game in which VanVleet scored 23 points, hit five of his 10 three-point attempts, and dished out nine assists while leading the resurgent Raptors in the absence of the injured Lowry.

It was the perfect snapshot of what VanVleet’s been doing all season. He caught fire in the first quarter, hitting four straight three-pointers, including an over-the-shoulder heave that he banked in from 36-feet out at the end of the shot clock. He would end up registering 13 points in just over three minutes – reminiscent of his historic scoring binge against Orlando earlier this month. In the third quarter, he wrestled the ball away from MVP candidate Joel Embiid, just a few days after doing the same to the two-time reigning MVP, Giannis Antetokounmpo.

For those who watch the Raptors regularly, this was nothing new. VanVleet has steadily improved in each of his five NBA seasons, and he’s taken his game to another level after signing a new $85 million contract this past fall. He’s been even better when Lowry’s missed time, a big reason why Toronto is 5-0 without its veteran point guard.

He’s playing all-star calibre basketball, and he’s had an all-star level impact on his team – both the eye test and the advanced statistics confirm that. Now, it’s just a question of whether he’ll get enough votes, which is no sure thing.

With the 10 starters unveiled last Thursday – voted in by the fans, along with the players and a select panel of media – the league’s coaches were responsible for filling out the rosters and picking the 14 reserves, which will be announced ahead of Tuesday night’s games. Each coach was only allowed to vote for players in their own conference and couldn’t select guys on their team.

The competition in the East is stiff. After Kyrie Irving and Bradley Beal were voted in last week – along with Kevin Durant, Embiid and Antetokounmpo in the frontcourt – James Harden and Jaylen Brown will almost certainly claim the conference’s two guard spots off the bench. That leaves VanVleet, Ben Simmons, Zach LaVine, Trae Young, and any of the forwards or bigs who don’t grab the three frontcourt positions vying for two wild-card slots.

You can’t be sure what, and who, coaches will value. LaVine and Young are putting up big numbers on losing organizations (though the Bulls have overachieved, for what it’s worth). Simmons is the second-best player on the East’s best team.

VanVleet finished ninth among East guards in the overall starters’ vote last week – 10th in the fan vote, seventh in the players’ vote, and ninth in the media vote. While that’s not especially encouraging, there’s reason to believe that he’ll fare better with the coaches. Many of the intangibles that he brings on the floor – leadership, toughness, basketball intellect, among others – are qualities that coaches tend to appreciate, and they get a chance to watch it up close.

As an undrafted player who’s worked his way to the point of even being considered for an all-star berth, his feel-good story won’t hurt his chances, either.

“Of course I feel like I’m an all-star,” VanVleet said on Sunday night. “I’m a confident guy. I don’t work this hard to not feel that way. I don’t play the way that I play to not feel that way. So of course, I would love to be an all-star. I would love to have the respect of the coaches in the league. But I don’t play the game for that, you know what I’m saying? Does that make sense? But yeah, it would be nice to be recognized that way.”

“I play the game extremely hard, I try to play with a pure heart every night, I play as hard as I possibly can, and whatever rewards I receive along that journey I’ll have to live with that one way or another. So that’s just kind of my approach to it.”

The voting process can get political, but when most coaches are deciding between multiple players, especially in the case of a close call, they tend to reward the one that comes from a winning program. That’s where VanVleet’s track record as a winning player and the Raptors’ history of success could help separate him, especially now that they’ve turned the corner and are back in the mix atop the East.

Up until recently, it seemed like they would be hard-pressed to get anybody in, they simply weren’t good enough to warrant the recognition. But with a timely run – they’re 8-3 in the month of February, tops in the conference – they’ve clawed above .500 for the first time this season and are in the same boat as most of the East’s teams, who all have similar records.

“We’re back in the hunt, we’re playing good basketball as of late, and I think that’s got to hold some weight,” said VanVleet. “But also, given the fact of what this season looks like, I don’t know how much the record is going to play a factor… I’m sure there’ll be a guy or two off the bench that’s not on a good record team. You’ve got to pick the best players, who they think are the best players at the time. I think the way we’ve been playing should help all of our chances but again, we’ll see where that ends up.”

There is some concern that the three Raptors players could split votes. Lowry is having another really good season and is well regarded among the coaches. It’s not hard to see him earning at least a few legacy votes. Siakam’s league-wide reputation may have taken a bit of a hit with his performance in the bubble last year and his slow start to this season, but he’s certainly looked like an all-star of late. Perhaps his recent play was top-of-mind when coaches were filling out their ballots this past weekend. Do players like LaVine or Young have an advantage because their teams only have a single candidate?

It will be close. VanVleet is deserving, but that doesn’t make some of these other guys any less deserving. At least a few worthy players will be the odd men out – that’s the way it is every year, and with so much parity in the league this season, these last few spots seems even more competitive than usual.

“I’m definitely hoping,” Nurse said. “I think it’s an honour for them. I think they would all really appreciate it and be proud of their accomplishment if they can get in. Kyle’s got a string of six going. Pascal obviously got on the board and wants to make it not just a one-time thing. I think Freddy’s got a case with how well he’s played, all the minutes he has played and how well he has played with Kyle being absent, et cetera. I hope somebody gets in there. It’s an organization and a team recognition and we are playing better in our last 20 games. Hopefully somebody will represent us.”