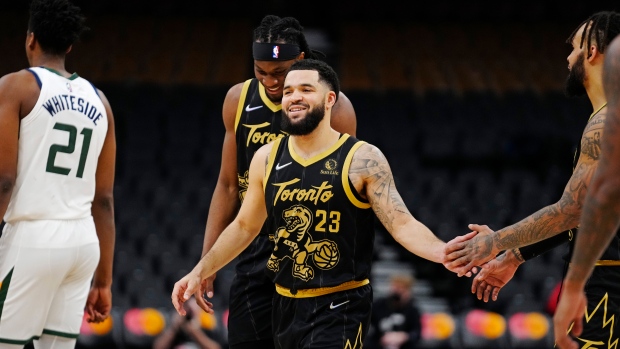 His Toronto Raptors were well on their way to what would have been the worst loss of their season, trailing by double figures late in the third quarter to a Utah Jazz team missing eight of its top-nine scorers, before the sixth-year guard took matters into his own hands.

VanVleet knocked down a three, then he hit another. He shook off a defender and knocked down a step-back jumper. He slapped the ball away from a Jazz player, who he had picked up in the backcourt, and went coast-to-coast for layup, also drawing the foul. At 6-feet, he went vertical at the rim create another turnover and found Chris Boucher for an easy bucket in transition. Anything and everything you can think of, he was doing it. The piece de resistance came as he drained a 30-foot heave just ahead of the buzzer.

When it was all said and done, VanVleet had scored 24 points in the frame, including 17 consecutive for the Raptors – one point off the team record – and 15 unanswered, becoming the seventh NBA player to do that over the last 25 years.

If he looked exhausted by the end of his remarkable third-quarter run, one of the greatest individual stretches in recent memory, it’s because he was.

“I didn’t have any [energy], but you just keep going, just being aggressive, trying to win by any means possible,” said VanVleet, who spent more time than usual getting some post-game treatment after his 37-point, 10-rebound, 10-assist masterpiece in Toronto’s 122-108 victory on Friday. “I was thinking it was gonna be a long 36 to 48 hours, whatever, until [Sunday’s game] if we dropped that one.”

The Jazz came to town missing most of its regulars. Rudy Gobert and Joe Ingles were in the COVID protocols and didn’t make the trip. Neither did Donovan Mitchell, Mike Conley or Bojan Bogdanovic, who were dealing with various injuries. It wasn’t clear if they would even have enough bodies to play. Like the Raptors did in Cleveland a couple weeks ago, Utah had to cobble together a makeshift roster of reserves, G Leaguers and last minute signings – a far cry from the Jazz team that currently sits third in the Western Conference.

Given everything they’ve been through recently, having just recovered from their own COVID outbreak, the Raptors weren’t going to feel too badly for them, but they also didn’t seem ready to take advantage.

Their first-half effort was lacking, bordering on embarrassing. Toronto surrendered 62 points to the short-handed Jazz, while shooting just 34 per cent and hitting five of 26 three-point attempts. They trailed by 13 points at halftime and by as many as 17 points in the opening 24 minutes.

VanVleet was battling, doing his best to drag his team back into the game, but it’s not like he was shooting the lights out, not yet anyway. He was just 2-for-11 in the first half, including 1-of-8 from three-point range. But we’ve seen this from VanVleet before. His shooting slumps don’t tend to last long.

Once he heated up and put the team on his shoulders, it was over for this iteration of the Jazz. Utah led by 12 points when VanVleet’s onslaught began. The Raptors outscored them 50-24 the rest of the way.

VanVleet’s third quarter was perfect, literally. He hit all eight of his shots, all three of his threes and all five of his free throws. He scored or assisted on 11 of the team’s 15 field goals in the frame. And as good as he was offensively, he was arguably even better on defence. As Nick Nurse pointed out afterwards, VanVleet had seven deflections in the third, including a couple of steals. His effort was contagious. As he took his game to another level, his teammates began to follow – the mark of any great leader.

“I always think when the point guard’s up there working really hard, the rest of the guys see that and they kinda start getting ready to move a little bit more, too,” Nurse said. “He did all parts of it tonight.”

The triple-double was VanVleet’s first as an NBA player. He couldn’t remember if he had ever recorded one before, at any level. He did in fact have 10 points, 10 rebounds and 11 assists in his junior season at Wichita State.

It’s the 30th triple-double in Raptors franchise history. It’s also the team's highest scoring triple-double ever, passing Vince Carter, who recorded one with 31 points back in 2000. VanVleet is the 11th different Raptors player to record a triple-double, but only the third since 2013, with Pascal Siakam accomplishing the feat last January and Kyle Lowry doing it 16 times over that span.

Lowry showed support for his former teammate and protégé on Twitter after the game. He also congratulated VanVleet over text. How to hunt down triple-doubles isn’t the only thing that VanVleet has learned from Lowry, though.

Even on the toughest of nights, games in which the Raptors were flat or lacking in energy, Lowry had a way of taking over, willing them to wins they probably didn’t deserve. More and more, we’re seeing that quality from his successor. Continuing to pad his all-star resume, VanVleet has scored 30 or more points in five of the last seven contests, fuelling Toronto’s five-game winning streak.

All five of the Raptors’ wins in this current streak have come against teams missing their best player, or in the case of Utah, its best players. The Clippers didn’t have Kawhi Leonard or Paul George on New Years Eve. The Knicks were without Julius Randle, among other starters. Dejounte Murray didn’t suit up for San Antonio on Tuesday and Milwaukee was without its two-time MVP Giannis Antetokounmpo on Wednesday. Such is life in the NBA these days, though, and Toronto understands that better than most. Take the wins wherever you can get them.

Perhaps they were feeling a little too good about themselves after winning four straight, or maybe they weren’t taking this depleted Jazz team seriously, but they took their foot off the gas and nearly paid for it. They may have needed that first to humble them, and they definitely needed the jolt of energy from VanVleet to wake them up.

“[There was] no panic, but sometimes you gotta call a spade a spade and we definitely did that with each other [at halftime],” said VanVleet. “We responded. That’s where your chemistry wins out over time and we’ve been in these situations before. [We’re] happy to come out with the win, nothing else really matters. I don’t care who’s coming to play, we gotta go out there and lace ‘em up and try to get it done.”