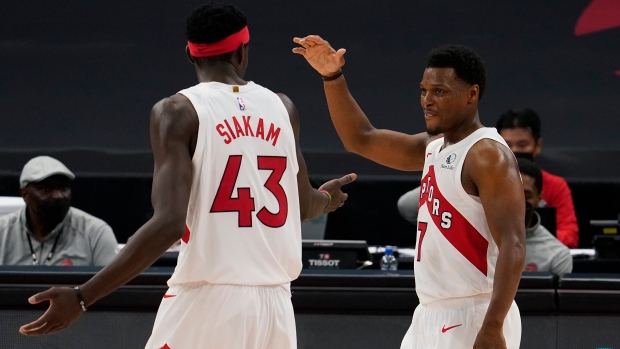 TORONTO – Walking off the court, maybe for the last time as a member of the Toronto Raptors – a franchise he will forever be synonymous with – Kyle Lowry couldn’t hide his emotion.

You could see it in his eyes as he gazed through a camera situated in the tunnel inside Tampa’s Amalie Arena, connecting with millions of Canadian basketball fans from more than 2,000 kilometres away.

They couldn’t be there to chant his name or give him his well-earned standing ovation, but you didn’t need to be to sense what that moment meant. The look on his face, the sound in his voice as he spoke to the media for more than 20 minutes soon after – it may not have been a goodbye, but it sure felt like it.

“I’m going to be honest, usually I bulls--- y'all, but it was kinda weird tonight not knowing what the next step would be, understanding there are things that could possibly be done on the front of me and the other guys on our team and the organization,” Lowry said following Wednesday’s 135-111 win over the Denver Nuggets. “So, it's kinda weird, I'm gonna be honest with you, but it was great to get a win, it felt good to be out there and, of course, it would've been crazier if it was in Toronto. But it was different tonight, for sure. I mean, who knows what's going to happen? No one knows what's going to happen but it was definitely, for sure, different.”

With Thursday’s 3:00 p.m. ET NBA trade deadline fast approaching, rumours that Lowry and teammate Norman Powell could be on the move have heated up of late. The veteran point guard, who also celebrates his 35th birthday on Thursday, insisted that he’s not quite sure how the day will play out or if he’ll be dealt. However, on the eve of the deadline, he looked and sounded like somebody that was expecting something to happen.

“Whatever will be will be, honestly,” Lowry said. “That’s the truth.”

“I don't know [what I want to happen]. I wish I could give you [an answer], but at the end of the day, I'm gonna [make] a decision and work it out and if something happens, it happens, if it doesn't, it doesn't. Everything happens for a reason. I personally, right now, I don't really put too much thought into it. My agent is really good at his job and [is having] a lot of decisions, he’ll look at it and help facilitate that decision.”

Lowry and the Raptors came into Wednesday’s game with all kinds of noise to drown out – nine straight losses (the latest coming at the hands of a Houston Rockets club that had dropped 20 games in a row), an altercation between the team’s max salary player and its head coach, and the upcoming deadline, which threatens to upend the most successful era in the history of the organization.

It’s an uncomfortable time amid an already painful season, but for two hours on a night that could end up being Lowry’s Raptors swan song, they hit pause on everything going on around them. For the first time in a long while, they looked like themselves again – a fitting tribute to the franchise icon and everything he’s stood for during his eight-plus year tenure with Toronto.

Just a couple nights after being embarrassed by a 12-win Rockets club, the Raptors thoroughly outplayed the 26-18 Nuggets, albeit with Denver in the second night of a back-to-back. They controlled the game from start to finish, trailing only briefly in the opening minute, and led by as many as 35 points.

Pascal Siakam, who reportedly got into a heated verbal exchange with Nick Nurse after being benched in the fourth quarter of Sunday’s loss to Cleveland, bounced back with 27 points, eight rebound and six assists. OG Anunoby hit five threes and made standout plays on both ends of the court, en route to 23 points. Fred VanVleet scored 19, Powell added an efficient 22 points. Lowry, very fittingly, only attempted five shots and scored eight points, but he recorded nine assists and was a plus-42 in 33 minutes – the best mark of his career and the highest +/- by any NBA player in a game this season.

It was a glimpse at what could have been, had this season broken differently. What if the front office had retained Serge Ibaka or Marc Gasol last fall, or done a better job replacing them? What if they had surrounded that core with better depth pieces? What if they pulled out a few of those narrow losses early in the season? What if they didn’t get hit by a COVID-19 outbreak just as they were starting to turn the corner? What if they brought this same level of effort, intensity and focus every night?

The decisions that Masai Ujiri and Bobby Webster have to make are unlikely to be swayed by any one game, or series of games. They’re not going to become buyers simply because the team looked great against Denver, same as they weren’t going to sell just because they lost to the Cavs or Rockets. At 18-26 and with the 11th-best record in the Eastern Conference, they’ve got to take a realistic view of where they stand, where they want to go in the near and long-term future, and figure out how they’re going to get there.

Up until recently, the chances of a Lowry trade seemed slim. As of last week, the Raptors were still telling inquiring teams that they did not intend on moving their point guard ahead of the deadline, and according to sources, Lowry and his representatives fully expected him to finish the season with Toronto before hitting unrestricted free agency this summer.

While the Raptors have not been soliciting offers for Lowry, as multiple reports have indicated, they’ve become more inclined to listen over the past few days, with the Miami Heat and Philadelphia 76ers emerging as frontrunners to land the 15-year vet if he is in fact moved.

It will hinge on a few factors. For one, what does Lowry want? He doesn’t have a no-trade clause, but with all the goodwill and mutual respect built up between player and franchise, the Raptors want to do right by him. They’re also not going to trade him just because they can, especially if he’s content playing out the season. It could be standard day-before-the-deadline posturing, but as of Wednesday night, sources confirmed that both Miami and Philly have been reluctant to push their chips in and make their best offers.

Of the two, Powell is more likely to be moved. At this point, it would be a surprise if he wasn’t. He’s expected to opt out of the final year of his current deal and become a free agent over this summer, and with his excellent season he’s probably priced himself out of being a long-term option for Toronto. With at least half of the league’s teams expressing interest in the sixth-year guard-forward, the Raptors seem determined to get an asset or two back for him rather than losing him for nothing.

“My roots are here,” said Powell, who the Raptors acquired as a second-round pick during the 2015 draft. “I’ve given everything to the franchise. Obviously I want to stay here. I’m not out looking for other teams to go play for. I’m solely focused on this season, being with the team and hopefully being able to finish out the season with them. But I understand that it’s a business. We’ve seen in the past what happens, it doesn’t matter your feelings towards what you want, the organization and the people in charge that pay me to play are going to make decisions that they see fit for the direction for the franchise. You’ve gotta be able to take that on the chin and live with it. But obviously I’ve spent my whole career here – the ups and downs, blood, sweat and tears, being a part of history, winning a championship. Obviously I wouldn’t want to leave being traded away.”

One thing is for certain, though; the Raptors are open for business, and change – potentially transformative, franchise-altering change – could be on its way. Whatever happens on Thursday, the relationship that Lowry and Powell – NBA champions, and the team’s two longest-serving members – have built with the franchise, its fans, the city of Toronto and country of Canada, that’s forever.