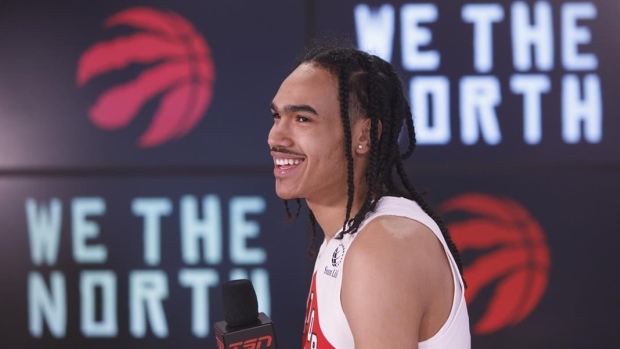 TORONTO – There’s a reason why people were so intrigued to see what the Raptors would do with their fourth-overall pick in July’s NBA draft, and a reason why they were willing to give them the benefit of the doubt when the team went off script to take Scottie Barnes.

Under this front office, Toronto has a long and well-documented history of turning prospects – often selected late in the draft, or plucked outside of the draft altogether – into rock solid rotation players, or in some cases even more than that.

The thinking: if they could find Pascal Siakam at the end of the first round or unearth Fred VanVleet as an undrafted free agent, imagine what they could do with a high lottery pick?

Naturally, there will be plenty of eyes on the early-season development of Barnes, who had a strong showing in his exhibition debut earlier this week and figures to play a big role in Nick Nurse’s rotation right out of the gate.

But even during a season in which they’ll feature one of the league’s highest profile rookies, the Raptors wouldn’t be the Raptors without some overlooked and underappreciated young talent to get excited about.

A hometown kid, Banton – who grew up in Rexdale, just northwest of Toronto – became the first Canadian-born player to be drafted by the Raptors when they took him 46th overall this past summer. Champagnie, who went unselected, agreed to a two-way contract with the team that same night.

At 6-foot-9, Banton is a long and rangy point guard. At 6-foot-6, Champagnie is an undersized forward with big man skills. Their games are very different but they’ve got a few things in common. For one, they’re both destined to become fan favourites, if they haven’t already. They also fit the mould of a Raptors prospect.

Led by Masai Ujiri, Bobby Webster and Dan Tolzman, Toronto’s front office has a type. There are qualities they look for in the young players they scout and ultimately decide to bring in, attributes that extend beyond the basketball court.

Siakam had them, so did VanVleet and many of the team’s other success stories over the years. It’s more than just raw talent, although it sure helps if they’ve got that too. They need to have that unrelenting work ethic and drive to prove people wrong. They need to have that chip on their shoulder. Banton and Champagnie check off those boxes.

“For me, I always had a dream in mind of making it to the NBA,” Champagnie said following the Raptors’ Wednesday morning practice session.

“One thing everyone knows about me is that when I put my mind to something, I’m going to go to do it, no matter what anybody says.”

Champagnie, 20, averaged 18.0 points and 11.1 rebounds as a sophomore at Pitt last season. He grew up in Brooklyn with his twin brother, Julian, who plays for St. John’s. Champagnie credits his brother for pushing him to be a better, and tougher, player.

Like VanVleet and several others that didn’t hear their names called on draft night, he saw the silver lining in going unselected. It meant he could choose his team, and he knew exactly where he wanted to go.

“I didn’t want to play anywhere else,” Champagnie said, acknowledging that Toronto’s reputation for finding and developing young talent was a factor in his decision. “When I went through my pre-draft process I went to about 16 or 17 teams and I told my agent right away I wanted to play in Toronto. Like right after the workout I told him that. Then when the draft ended and I got the option I just knew where I was going to pick already. It was a no-brainer.”

Draft night worked out pretty well for Banton too. After transferring from Western Kentucky to Nebraska, where he averaged 9.6 points, 5.9 rebounds and 3.9 assists last season, the 21-year-old also wound up in his ideal landing spot. As a kid, he would take the subway to watch Raptors games at the then Air Canada Centre. Now, the friends and family members he used to go to games with can watch him play on that very same court.

“It was a dream come true for me,” Banton said after logging a productive 22 minutes in Monday’s preseason opener, a 123-107 win over Phiadelphia. “When I first got out there and people were showing me love, it [set] in for the first time that it’s actually true. I’m grateful to put on for my city. I’m grateful to be here.”

Playing alongside fellow rookie Barnes, as well as young veterans Yuta Watanabe and Svi Mykhailiuk, Banton and Champagnie helped power the 20-3 run that blew Monday’s game open early in the second quarter. Banton ran the point, pushed the pace – something he and the coaches have been working on since Summer League – and made plays in transition, finishing with six points, five rebounds and four assists. Champagnie looked like a battering ram, getting into the paint at will, finishing around the rim, and controlling the boards, which is one of his biggest strengths. He led Toronto’s reserves with 17 points and 10 rebounds in his 22 minutes.

That they were among the first Raptors players to check in was a bit of a surprise and likely a function of the team’s injuries – they were playing without four regulars in Siakam, Chris Boucher, Khem Birch and Gary Trent Jr. However, they also earned it with their strong play in practice this past week. They’ve both been early standouts in training camp, according to Nurse.

“He’s been awesome,” the Raptors head coach said of Champagnie. “He’s made shots and he is a pain in the neck on the glad for everybody.

He just really has a knack for [rebounding] and he really believes he can get them all. He’ll get his hands on them and tip them to himself, tip them to other guys. He’s tough, man. He’s been really good. It will be hard to keep him out of the rotation the way he has played.”

They both have guaranteed contracts for this season – Banton making the rookie minimum, with a non-guaranteed team option for 2022-23, and Champagnie earning almost half that on a two-way deal that will see him split time between the G League and the parent club.

“I just needed my foot in the door,” Champagnie said. “I’ll figure it out from there. I’m always hungry for more, ready to work.”

The Raptors want Banton to get as many reps as possible, playing and handling the ball, which means he can expect to be sent on assignment as well.

Still, don’t discount the possibility of either or both rookies ending up in the rotation at some point this season. Historically, Nurse has shown a willingness to play young or two-way guys meaningful minutes – Watanabe appeared in 50 games as a two-way player last year – and he likes to keep the backend of his rotation fluid.

That appears to be the case again, and perhaps more than ever before. With some key early-season injuries, as well as the health and safety protocols and COVID-19 uncertainty, Nurse is open to expanding his rotation. Rather than nine or 10 guys, he’s looking for 12 or 13 that he trusts and, by all accounts, Banton and Champagnie are shooting up that list.

When healthy, the team’s 10-man rotation could look something like: VanVleet, Goran Dragic, OG Anunoby, Siakam, Birch, Malachi Flynn, Trent, Barnes, Boucher and Precious Achiuwa. But Siakam and Boucher are expected to miss the first few weeks of the season as they recover from shoulder and finger surgeries, Birch has been away from the team in camp due to the protocols (though he’s expected to be available for the season opener on Oct. 20), and Banton was already playing ahead of Flynn in the first half on Monday (though that could change game-to-game).

In other words, there’s opportunity to be had in the Raptors’ rotation, and neither Banton nor Champagnie seem like the type to waste opportunities. They should fit right in.​