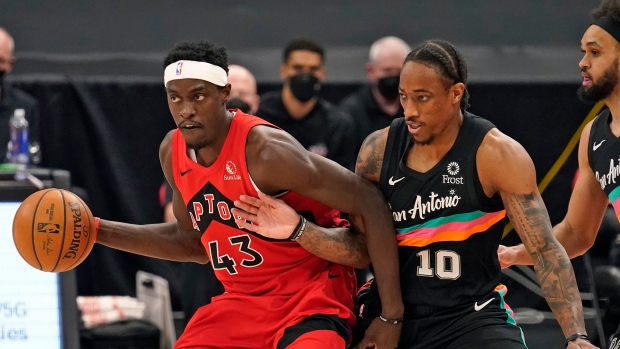 TORONTO – It’s going to be hard for Pascal Siakam to top this year’s Mother’s Day gift.

The 27-year-old Raptors forward recently purchased a new house for his mom. His siblings helped him with some of the details, which included planning the surprise unveiling.

“Mom’s been everything to us,” Siakam said on Monday. “She’s just a superhero.”

“For me to be able to bring that joy to the family is just such a blessing. I feel blessed to be in that position and I’m just super happy about it. Obviously seeing her reaction makes it worth it.”

We got a glimpse of that reaction on social media Sunday evening.

“This is our house,” Siakam told his mom in the video he posted to Instagram, as she kicked off her shoes and began to cry. It was a special moment for him and his family. You can understand why he would have been reluctant to share it with the world.

“I’m a super-private person and it was definitely a little bit of discussion whether I should share that or not,” Siakam admitted. “I guess I was convinced by my family to do it.”

Not too long ago, Siakam was universally beloved by the Toronto fan base. An endearing, overachieving underdog who made the unlikely journey from Cameroon to the NBA – it was impossible not to root for him. His upward trajectory, from late first-round pick to role player to starter to star, certainly didn’t hurt.

Lately, though, he’s become a popular lightning rod among segments of that same fan base. He could do no wrong. Now, depending on whom you ask, he can do no right. That’s professional sports in the social media era for you. The internet hasn’t exactly been a friendly place for Siakam this past year, so why wouldn’t he be skittish of it?

It shouldn’t be too difficult to feel empathy for Siakam. Some of the criticism he’s received borders on excessive, personal or flat-out cruel. Nobody deserves that, regardless of how much money they make or how they’ve performed. Even the very legitimate basketball-related concerns come with an important caveat or two.

After an underwhelming showing in the bubble during last year’s restart and playoffs, Siakam’s 2020-21 campaign was mired by inconsistency, late-game struggles, and on and off court frustration.

But it’s also worth noting that he was one of the last players to find a temporary home and get settled after his team relocated to Tampa. He was one of multiple Raptors players to spend nearly three weeks in the league’s COVID-19 protocols. To little surprise, he kept his personal experience dealing with and recovering from the virus private, other than revealing that he lost roughly 15 pounds. More than a month after his return, Nick Nurse acknowledged that Siakam – and the others that were out – still wasn’t feeling quite right. Some will read those as excuses, but they’re the reality.

To his own admission, Siakam has had a disappointing season – the first of the maximum salary four-year contract extension he signed back in the fall of 2019. He’s not alone in that regard. With Indiana's win over Cleveland on Monday night, the Raptors were officially eliminated from the race for a spot in the East's play-in tournament. A lot had to go wrong for them to miss the playoffs for the first time in eight years. It’s been a frustrating campaign, and Siakam – who’s occasionally felt like he’s been unfairly scapegoated for it – hasn’t always handled that frustration the right way.

He missed an early-season game against the Knicks as a disciplinary measure for leaving the court and going straight to the locker room after fouling out of the previous contest. Later in the year, he initiated a heated verbal exchange with Nurse after being benched in the fourth quarter of a loss to Cleveland.

Also to his own admission, Siakam isn’t a finished product as a player or as a person. It’s unreasonable to expect him to be. The contract comes with financial security for him and his family, but it also comes with responsibility, pressure and scrutiny that he’s still learning how to manage, on top of everything else that’s going on in the world.

“It’s different, it’s crazy, you get so much more attention and it’s something that I’m not used to and it’s not really me or my character,” Siakam said of being in the spotlight as a max player. “So I think that it’s just been interesting to manage that and figure out who you wanna be as a person, either on the court or off the court. How do you wanna be remembered or how do you want people to look at you?”

“I just wanna do everything that I can to be the best that I can be.”

There’s no shortage of things for him to work on over the coming summer, from ball-handling to decision making, finishing plays stronger around the rim and becoming a more reliable closer at the end of games. Still, it’s possible to acknowledge those things while also crediting him for his marked improvement late in the season.

Siakam left Saturday’s loss to Memphis with a strained shoulder, an injury that will keep him out of Tuesday’s game against the Clippers. But in the 22 games prior, the fifth-year forward averaged 24.0 points, 7.5 rebounds, 4.0 assists and 1.2 steals on 47 per cent shooting. He’s looked more engaged defensively and shown encouraging signs of development as a playmaker, while making a more concerted effort to attack the rim and get to the free throw line. It’s been one of the best stretches of his young career, on par with last season’s first half when he was an all-NBA calibre player.

Given how tough this past year has been for Siakam, there’s value in closing out the season strong and regaining confidence going into a crucial off-season.

If you want to write him off, that’s your prerogative. But he’s only 27 and has repeatedly shown that he’s willing and able to put in the work, turn weaknesses into strengths, and come out of it a better player. There’s no reason to think he can’t do it again.

“I think I’ve evolved a lot as a person and as a basketball player and I just think it’s going to continue,” said Siakam. “Adversity, obviously, is not something that you want to go through but sometimes it defines the type of person you are. I think going through adversity sometimes will make a difference [depending] how you come out [of it].”

“I know that I'm a better player coming out of this and just going through the different struggles and stuff, and I'm excited about the future.”​