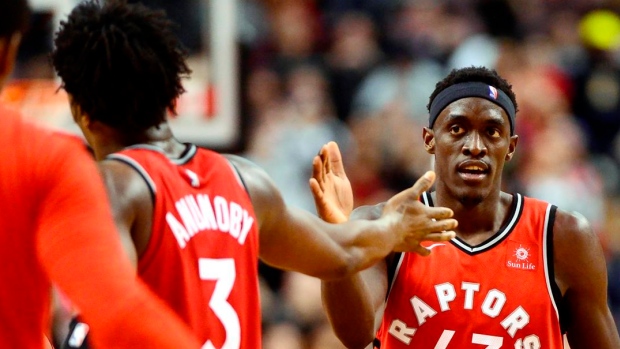 TORONTO – The Raptors had high hopes for the summer of 2021.

They had big plans, grand ambitions, and they weren’t alone. Several teams around the NBA had this particular off-season circled years in advance, and Toronto isn’t the only one who’s going to come out of it feeling at least a little underwhelmed by the result.

This was supposed to be the summer of Giannis.

With Antetokounmpo nearing the end of his previous contract, at least a third of the league’s clubs were lining up their finances in the interest of poaching the 26-year-old superstar and two-time NBA MVP from Milwaukee.

It was always a pipe dream, and not just for Toronto, but for everybody. The chances of him declining his supermax contract extension, saying goodbye to the only NBA home he’s ever known and signing with any one particular team were extremely low. But for a generational talent like Antetokounmpo, you still take those odds.

Nearly every decision the Raptors made, or didn’t make, from the moment Kawhi Leonard left for the Clippers in 2019 came with maximizing future cap flexibility in mind.

They were willing to go higher on annual salary if it meant capping Kyle Lowry’s extension at one year back in the fall of 2019. They wanted to retain Serge Ibaka and Marc Gasol last off-season, but not at the cost of offering them multiple years.

It’s not like they had all their eggs in the Giannis basket, though. There were fallback options in what was expected to be a loaded free agent class. They would be able to bring back their own free agents, including Lowry, if that’s the path they chose, or they could pivot in a different direction. Still, Antetokounmpo was their target.

But they never got to make a run at him. Nobody did. Antetokounmpo signed his extension with the Bucks ahead of last season, and that decision is looking pretty good in hindsight. Less than a year later, the Greek Freak is an NBA champion and Finals MVP.

Meanwhile, this vaunted crop of free agents thinned out considerably. Paul George and Rudy Gobert also signed extensions. Victor Oladipo got hurt, and then he got hurt again. One-by-one those fallback options came off the board, leaving Toronto’s own player, Lowry, as one of the best and most coveted free agents available.

On Friday, the Raptors finalized the sign-and-trade deal that will send Lowry to Miami in exchange for big man prospect Precious Achiuwa and veteran point guard Goran Dragic.

On one hand, that’s not a bad haul for a 35-year-old player that was on his way out regardless. While the greatest Raptor ever and the franchise he won a title with parted ways on good terms, it’s clear that a return was never really on the table. Both sides knew it was time to move on.

“I think the direction Toronto is going in is they want to give the opportunities to [Fred VanVleet], Pascal [Siakam], OG [Anunoby], a couple young guys, the young draft picks they have,” said Lowry, speaking publicly for the first time as a member of the Heat on Friday. “They have some great core pieces. They’re in great hands and great shape. It was a situation for me where it was an opportunity to do something different… It’s time to turn the page in the book.”

“You probably have to go back to the second half of [last] season,” said Raptors general manager Bobby Webster. “You probably could see the direction the team was going in, and jumping up in the draft to get the fourth pick, philosophically, I think going young became kind of a more desirable path.”

On the other hand, if this is all they have to show for a couple years of meticulous planning, if that turns out to be their biggest off-season additions – and, barring a significant trade, they will be – then you can understand why some fans might be disappointed.

Of course, the Raptors can only control what they can control. If things had lined up perfectly for them, they would’ve had an opportunity to pitch Antetokounmpo on a future in Toronto. Failing that, there would have been several other star free agents worth throwing their money at. Instead they were left with an unenviable choice, and all they could do was try to make the most of it.

Once it became clear that Lowry wouldn’t be back, they could either let him sign with another team outright and open up somewhere between $20-28 million in cap space – depending on what they decided to do with their other free agents and team options – or they could help him get to his preferred destination and recoup assets in a sign-and-trade.

They opted for the latter, essentially choosing an intriguing prospect in Achiuwa and the expiring contract of Dragic over the chance to chase a player or two in this watered down free-agent class.

The deal they made was more or less on par with what teams – including Miami – were offering the Raptors for Lowry at the trade deadline in March, according to league sources, so there’s no opportunity cost there. The real question is: could they have done more with the cap space?

The free-agent route would have been tricky. First, were there guys out there that they liked enough to, in most cases, overpay for? Then, how attainable did they feel those guys were going to be?

Most of the bigger names in this class of free agents were restricted. One of the players they reportedly had interest in was Cavs centre Jarrett Allen. Cleveland ended up re-signing him for $100 million over five seasons. The Raptors couldn’t have offered more than four years, meaning they would’ve needed to go higher on annually salary. In that scenario, they would’ve waived Chris Boucher’s non-guaranteed deal to open up more cap space.

So, let’s say they sign him to a four year, $100 million offer sheet. Cleveland takes a few days to mull it over and still probably matches, only now they’ve lost Lowry and Boucher, and their other free-agent targets have come off the board while their cap space is tied up in the offer sheet. Instead, they’re left with two or three lower-tiered free agents, who they also have to overpay for.

In Achiuwa, the Raptors get a player they’ve had their eye on for a while. He was high up on their draft board a year ago. They hoped he would fall to them with the 29th pick, where they ended up selecting Malachi Flynn, and even considered moving up to get him, but he went to Miami at 20.

At 21-years-old, the Nigerian born Achiuwa is still very raw offensively. However, he fits the mould of a Raptors prospect – long (6-foot-8 with a 7-foot-2 wingspan), athletic, hard working and versatile defensively. He only played sparingly as a rookie with the Heat last year, averaging 5.0 points and 3.4 rebounds in 12 minutes over 61 games, but showed promise. He also addresses a positional need for Toronto as an undersized centre and should also help on the boards.

“Precious is a huge part of this deal for us,” Webster said. “We really liked him last year in the draft so I think that was a huge get in the sense of a young player that we like and fits.”

The Raptors have spent the past few days trying to re-route Dragic and the $19.4 million remaining on his expiring contract to a third team. The Slovenian point guard has been linked to Dallas, thanks in large part to his relationship with countryman Luka Doncic, but nothing materialized in those trade discussions.

It appears Dragic will start his 14th NBA season in Toronto, though he could be a valuable trade chip at the deadline. Until then, the 35-year-old would help fill the void left by Lowry in the backcourt and in the locker room. Next to Dragic, the oldest players on this extremely young Raptors roster are the two Montrealers, Boucher and Khem Birch, who was re-signed on Friday, and they’re just 28.

Even though he’s battled injuries in recent years, the former all-star can still play. In 50 games with the Heat last season, Dragic averaged 13.4 points and 4.4 assists while shooting a solid 37 per cent from three-point range.

He shares a few important qualities with Lowry, his teammate in Houston more than decade ago. Like the man he could replace in Toronto’s starting lineup, Dragic is a tough, physical, high IQ player.

They could use his leadership, and if they can turn him into an asset or two down the line, even better.

“Obviously, if we got an offer that was too good to refuse we’d listen but ultimately we want Goran here,” Webster said. “He’s happy to be here, obviously he’s been able to carve out a very nice career for himself. Talking to Masai [Ujiri], talking to everyone here, we’ve watched him a ton and I know a lot of people have seen him kill us. As a basketball player, as a vet, he provides a lot of value to us.”

As it stands going into the weekend, the Raptors have nine players under guaranteed contract for next season: Pascal Siakam, Fred VanVleet, OG Anunoby, Malachi Flynn, Birch, Achiuwa, Dragic, fourth-overall pick Scottie Barnes, and Gary Trent Jr., whose new deal will become official over the coming days. Boucher will become the ninth when his contract becomes fully guaranteed on Sunday.

Summer League opens on Sunday in Las Vegas, where the Raptors can get a closer look at Barnes, Flynn, possibly Achiuwa and several guys who will compete for the final few roster spots, including returning players, Yuta Watanabe and Freddie Gillespie.

It’s still early in the off-season, but outside of another depth signing or two, the Raptors’ only avenue to add will be through the trade market. Could they pull off something big and put their stamp on the summer of 2021 after all? Maybe. You can never rule it out with this front office. But, for what it’s worth, it doesn’t sound like they’re looking to go all-in on this team.

The direction is clear, though it’s not exactly where they were hoping to be headed. They’re not rebuilding, but they’re certainly building.

“We think we have a pretty good foundation in place,” Webster said. “Players that have been part of the organization for a while. Players that are under contract for a number of years… And we're excited about the young guys... We haven't fully restocked the cupboard, but I think that's the direction that we're heading.”​