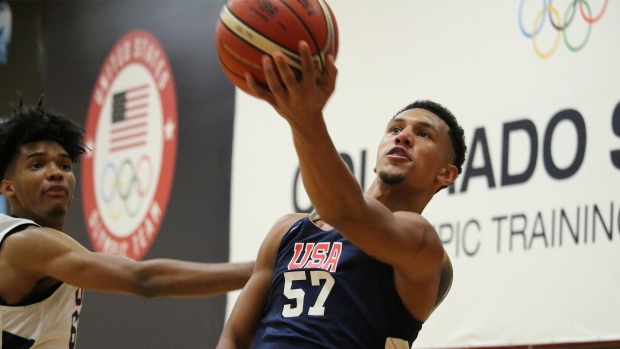 TORONTO – Bruce Weber wasn’t quite sure what to expect when he took the job coaching USA Basketball’s under-19 team ahead of the 2019 FIBA World Cup.

Even after holding a four-day training camp in Colorado Springs, Colo., in June of 2019 and making the roughly 13-hour journey to Crete, Greece for the tournament later that month, he didn’t know how it would all come together.

“I’ll be honest with you, it took a little bit of time for me to realize [how good we could be],” said Weber, the long-time college coach, who has spent the past nine years at the helm of the Kansas State men’s basketball program.

Two years later, Weber proudly points out that by the end of this week nine of the 12 players from that 2019 junior club will be in the NBA.

Three of them are already in the league: a couple former lottery picks in Kings All-Rookie First Team guard Tyrese Haliburton and Pelicans guard Kira Lewis Jr., as well as Nets two-way forward Reggie Perry. Six more will hear their names called in the first round of Thursday’s draft, including the projected top-five picks.

Before Cade Cunningham, Jalen Green, Evan Mobley, Jalen Suggs and Scottie Barnes were auditioning for NBA front offices, and before they established themselves as the very best prospects in college basketball or in the G League, those five guys played together and won gold together as high schoolers with the national team.

Weber had plenty of talent to work with; that was never in question. However, they were especially young and inexperienced, even for a team in the U19 age group.

“Those guys were just used to winning on talent.”

But that didn’t deter Weber and his staff from coaching up, leaning on and eventually developing trust in their young talent.

The United States was coming off a disappointing showing at the 2017 U19 World Cup, falling to Canada and its 17-year-old phenom RJ Barrett in the semifinals. It was the first time that the U.S. failed to win gold at the biannual competition since 2011. The 2019 iteration was looking for redemption.

The country’s U19 clubs had rostered and even relied on high school players before. In 2015, future third-overall pick and NBA all-star Jayson Tatum led the U19s to a first-place finish before his 18th birthday.

This was different, though. That 2019 group featured six of ESPN’s top-eight recruits from the class of 2020, which also included forward Ziaire Williams. Mobley would suffer a back injury early in the tournament, limiting him to just two games and seven minutes, but the other five high school kids played key roles on a team that obliterated the competition in Greece.

The U.S. won all seven of its games by double digits. It beat New Zealand by 40 points in the opener, defeated Latvia by 50 later in the tournament, and then knocked off Mali by a score of 93-79 in the finals to claim gold. Its average margin of victory was 28.7 points.

They were extremely balanced, both in terms of minute distribution and production. Cunningham and Suggs started alongside Haliburton, Perry and Jeremiah Robinson, but seven players logged at least 20 minutes per game. Eight players averaged between 8.4 and 13.1 points, including Cunningham (11.7), Green (10.1), Barnes (9.7) and Suggs (9.6).

A big reason for the team’s success was the buy-in from its younger players, most of whom were not accustomed to sacrificing minutes, touches and individual numbers, or to sharing the spotlight.

Green, Suggs and Barnes had each played for and won gold with the U16 and U17 clubs the previous two summers, but this was Cunningham’s national team debut. It was also an important opportunity for them to showcase themselves, and Weber didn’t let them forget it.

“I kept telling them how valuable a tool this can be for [their] future,” the head coach said. “And the exposure was even more than I ever dreamed. Every NBA team was there and double [what it usually was], whether it was at Colorado Springs or in Greece, and so that exposure was amazing.”

Even at that stage, coming off their junior years in high school, elite prospects are already on the radar of NBA teams. Still, this gave scouts a chance to see these young players in a more structured and competitive environment. It was a chance to see how they stack up playing with and against a higher level of competition.

Can they co-exist with other stars and are they willing to accept a lesser role? Can they hold their own against older and more experienced opponents? How well do they respond to coaching, or the pressure of competing on the world stage?

“Most high school players are not used to seeing that consistent level of competition and that consistent level of opposing preparation; it’s just not the same,” said Mike DeCourcy, a college basketball columnist at the Sporting News. “Even if you’re at one of the elite prep schools, it’s not the same. The talent level and the coaching isn’t the same. So the opportunity to be at the FIBA world level helps a ton. First and foremost the opportunity to be coached, there’s that, and then there’s the opportunity to play every day for three weeks against really high-level talent with something at stake, first making the team and then earning minutes.”

None of the prospects dominated the tournament individually, but they also didn’t look out of place in that setting, which was telling.

Having just turned 17, Green was the youngest player on the roster. His elite athleticism, which was on display with G League Ignite last season and will likely make him a top-three draft selection this week, was already there. This was his chance to show that there’s more to his game – a prerequisite for him to stay on the floor, according to Weber. He did that with his standout performance in the semifinal win over Lithuania (18 points, six rebounds, two steals and 4-of-10 shooting from three-point range in 23 minutes).

“He was one of the best players on that team in my opinion,” said Perry, one of the club’s leaders and the tournament MVP. “He was one of the guys that really caught my eye and surprised me a lot. You see a lot of his highlights now but what people don’t really see is how good a basketball player he is.”

In the two years since they all played together, Perry says he has seen the most growth in Suggs, who is coming off an excellent freshman season at Gonzaga. But even in just 16 minutes per contest with the national team, Weber was impressed with the young point guard’s poise and leadership skills.

“I always talk about how he was a two-sport athlete,” Weber said of Suggs, who had just led his high school football team to a state championship as a quarterback and was the first player to ever be named Minnesota’s Mr. Basketball and Mr. Football in the same season.

“When you’re on a football team you’re not one of five, you’re one of 40 or one of 60. And even if you’re a star it’s more of a team thing. I think being part of that, and that toughness and that competitiveness, to me those were things that stood out with him.”

With his unique mix of size, motor, defensive instincts and playmaking ability, as well as a big personality, Barnes has been shooting up draft boards this summer. Initially pegged as a mid-to-late lottery pick, the versatile point forward could be the player to break up the preordained quartet of Cunningham, Green, Mobley and Suggs, with the Toronto Raptors reportedly considering him at fourth overall. Those who played with or coached him back in 2019 aren’t surprised.

“He’s just a happy-go-lucky young man, but he gave us that unique point forward kind of guy,” Weber said. “He passed the ball well, he really learned schemes. It came very natural for him and that kind of surprised me, to be honest. He comes every day with that bubbly [personality] but then he understood the game. Sometimes guys like that don’t focus or don’t concentrate but he really did a good job with that.”

Then there’s Cunningham, the expected first-overall pick, who climbed to the top of this loaded class after turning heads in that 2019 tournament.

At just 17, the emerging young star showed glimpses of his transcendent talent. If he wasn’t the best player on the floor, he was assuredly the one opposing teams had to worry about most, with his ability to make plays and impact the game defensively. He averaged 4.9 rebounds, 5.7 assists, 1.4 steals and 0.9 blocks in 23 minutes per contest, and scored a team-leading 21 points in the gold-medal game. His stock has been rising ever since.

“Cade was just kinda coming into his own,” Weber said. “I remember when he made [the team], how excited his mom and grandpa were, hugging me and thanking me for the opportunity. Obviously, two years later he’s come a long, long way. So, I think that was a young man that really took the opportunity and ran with it. But I think all of them did a in a way.”

Barring a shocking turn of events, Cunningham will be the first to hear his name called on Thursday, with his former USA Basketball teammates likely to follow in some order. That they all shared the experience two years ago, and will now share this one, is a fun draft night storyline, but it’s also no coincidence.

“It was challenging but it was a fun experience and it’s a lifetime memory for me and I hope for them,” said Weber. “But, also, it was a great opportunity for them to get that experience, to get that exposure and it helped a lot of them end up in the NBA.”