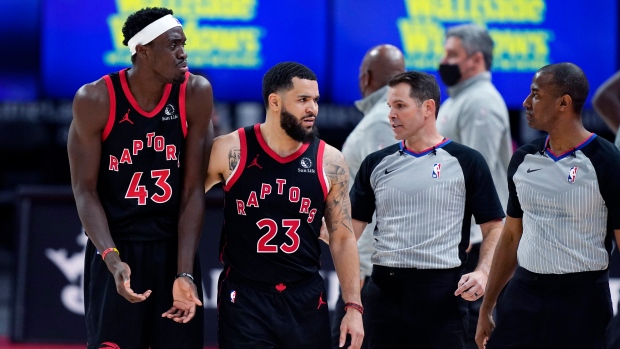 In one word, Nick Nurse went with “tumultuous” earlier this week. There’s no shortage of fitting adjectives. “Frustrating” or “disappointing” surely come to mind. Fred VanVleet chose “inconsistent.” That’s a good one, too.

“Inconsistency, and that's in schedule, that's in the world, that's in play, that's in health, everything, emotions, everything,” VanVleet said. “There was no continuity whatsoever from start to finish. Humans are simple creatures. We need a schedule, we need to follow certain routines, and it was just up and down, and trying to catch up, we were playing catch up from the start of the season.”

The things that set them back initially look pretty small in the rear-view mirror after everything that’s happened since. This team has been through a lot since losing Serge Ibaka and Marc Gasol in free agency, or relocating to Tampa ahead of training camp, or starting the campaign with a 2-8 record. They found themselves in an early hole, and for so many reasons both in and outside of their control, they could never get out, until now.

With Sunday’s 125-113 loss to the Indiana Pacers, Toronto’s season came to a merciful end. The Raptors finished with a record of 27-45 – their worst since 2011-12 and the eighth-worst in the franchise’s 26-year history. They’ll miss the playoffs for the first time in eight years, but that reality had already sunk in.

They’ve been playing this thing out for more than a month, long before they were officially eliminated. Kyle Lowry missed 17 of the final 24 games, most of them for rest. VanVleet, Pascal Siakam and OG Anunoby were held out with nagging injuries they almost certainly could have played through.

“It’s kinda like a blowout game,” VanVleet explained. “You know when you get blown out by 30 [points] and the fourth quarter’s taking all day? There’s media timeouts, some dumb coach calls a timeout and draws up a play with 30 seconds left. That’s what these last few weeks have felt like.”

At some point, the risks of trying to salvage a lost season seemed to outweigh the potential reward for the organization. They’re more than ready to move on.

So what comes next? A team that is two years removed from being at the pinnacle of the sport and winning an NBA championship, a team that is a year removed from finishing with the second-best record in the league and coming a game short of potentially returning to The Finals, now finds itself counting its lottery balls.

How does a club that has experienced so much success process what most people would call failure, and more importantly, how does this group respond to it?

It starts with something they haven’t had in quite some time: the chance to take a breath, reflect and recharge. Most of these guys are eager to hop on a plane Sunday evening or early Monday morning and bid farewell to Tampa. Some of them will fly home. Others will head to a beach somewhere and take a short but much-needed vacation before getting back in the gym and back to work. In either case, it’s a crucial part of the process.

“I think that we have a lot of players that we're probably gonna have to hold 'em out of the gym for a little while just to get 'em to rejuvenate rather than asking 'em to get in there,” Nurse said. “We are excited about that.”

“I would say that there's some hunger and desire for us to get started on next season fairly quickly. I think that the adversity that we faced this year probably fuels a lot of that.”

For almost everybody in the organization these were uncharted waters. Nurse has won at just about every level and every stop of a three-decade coaching career that’s taken him all over the world. Lowry hasn’t missed the postseason since his first year in Toronto. Winning basketball is all that VanVleet, Siakam and Anunoby have known since they’ve been professionals, and even before that.

Recently, Siakam made an interesting point. To paraphrase; it’s human nature to dread adversity, nobody wants to go through it, but it’s through adversity that we learn and grow. If that’s the case, these Raptors have had plenty of opportunity to learn and to grow over this past year.

All 30 of the NBA’s teams have been touched by the COVID-19 pandemic in some way, but none of them were impacted quite like Toronto. The Raptors are the only club that had to move its operations across the continent, find new homes and get settled in a different city, and then essentially play 72 road games.

They’re the only team that lost almost its entire coaching staff and half its roster, including three of its four best players, to the league’s health and safety protocols for an extended period of time. And to make matters worse, the team’s COVID outbreak came at a time in which they seemed to finally be turning a corner. They could never fully recover, both spiritually and literally speaking.

“I find myself doing a lot of soul-searching just in life in general,” said VanVleet, who was one of the players that tested positive for the virus in March. “I'm at a crossroads in my life. I spent 27 years [working] to get to this point, to get the big contract, to have two kids, to have a happy family. But I've been a winner the whole time. So the moment I get to the pinnacle of my life and where I wanna be, we have this s***y-a** season. It's just a lot of back and forth on who that makes you as a person, because you let winning define so much of your character. Do you know what I'm saying? When you're not winning anymore, you're searching, like, well damn, if it's not winning, what is it?”

“There was a lot of that this year, just mentally. Obviously, I learned a ton about on the court stuff and where I need to be better and certain things like that. But yeah, I would say [I’ve learned more about myself] as a person. It was a great challenge this entire year, and hopefully this is the start of the upward climb from here going forward.”

This is a critical off-season for the Raptors, collectively as an organization and individually as players and personnel. It’s one of their biggest in franchise history. Their most important player ever, Lowry, is about to become a free agent. The future of team president Masai Ujiri, their most important executive ever, is also uncertain.

They’ve only got four players under fully guaranteed contracts for next season: Siakam, VanVleet, Anunoby and Malachi Flynn. Will they retain their promising late-season acquisitions, Gary Trent Jr. and Khem Birch, who are both headed for free agency (restricted and unrestricted, respectively)? If they don’t bring back Lowry, what will they do with the cap space that they prioritized over offering Ibaka a second year of guaranteed money last fall?

For the guys who are back next year, how will this experience have helped them develop as players? Can Siakam find some consistency in his game and grow into his role as the team’s primary scorer and closer? Can Anunoby build off his career season and take another step as a two-way star? Is VanVleet ready to inherit a bigger leadership role on and off the court if Lowry does indeed move on?

However, for all the disappointment they’re feeling and questions they’re facing, there is still cause for optimism. They’ve got a promising young trio locked up long-term. They’ll likely add a top-10 pick to that core this summer and have the flexibility to build around it.

Although this was always meant to be something of a transition year, things didn’t go according to plan. In fact, very little went to plan. But their hope is that they’ll look back on it as a blip year, an unexpected yet brief detour on their path to continued success. How they bounce back, or if they bounce back at all, will depend on what they’ve taken from it.

“[Losing] was the worst part and the best part is that adversity brings you closer to the people that you’re in it with,” VanVleet said. “I grew with a lot of the guys and with the team, and I think going forward this will be a good moment to look back on. We were at the highest heights not that long ago and here we are pretty low, so we have to pick ourselves back up and start climbing again.”​