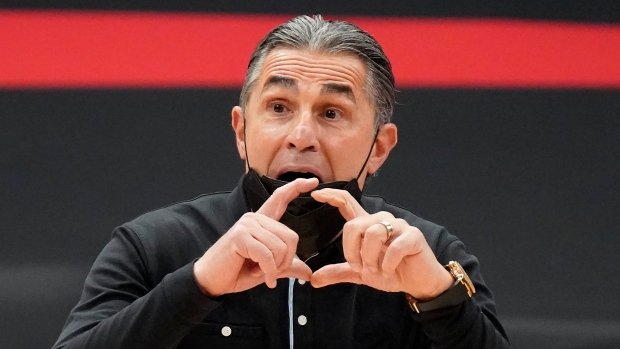 TORONTO – When Raptors general manager Bobby Webster learned that his team could be without more than half of its coaching staff for Friday’s game, including head coach Nick Nurse, one of the first calls he made was to the franchise’s longest-tenured player, Kyle Lowry.

In a different world, one in which the NBA’s collective bargaining agreement still permitted the use of player-coaches in the league, that may have been a very different conversation.

Despite his wealth of knowledge and experience, and despite the fact that he already does half of the job as a leader on the floor, anyway, the 34-year-old point guard has always insisted that he’s too impatient to ever be a coach. As fun as it would have been to see him try his hand at it – hitting threes and taking charges on the court, while drawing up plays and making substitutions off of it – unfortunately, it was not to be, at least not officially.

“I don't know if we have the budget to add that to his resume,” Webster joked, before clarifying that, by rule, the league doesn’t allow teams to pay a player to do anything outside of their contract, including filling in as acting coach.

“I’d be a tough coach and I wouldn’t want to coach somebody like me,” Lowry said afterwards, admitting that he would’ve been somewhat intrigued if it were actually a possibility. “So, I’ll pass on that.”

Even still, with Nurse and five of his assistants unavailable due to the health and safety protocols, they knew they could lean on Lowry to bring some stability amidst a chaotic 24 hours for Toronto.

It was late afternoon on Thursday – a rare day off for the Raptors following back-to-back games – when, according to sources, one of the coaches tested positive for COVID-19. With the NBA overseeing the contact tracing process, all of the team’s front-of-the-bench coaches went into quarantine.

By Friday morning, the decision was made. Nurse and five members of his staff would have to miss that evening’s game against Houston, and while they’d be able to continue contributing remotely, the timeline for their return was uncertain. Pascal Siakam, who returned an inconclusive test on Friday, was also a late scratch.

For years, they’ve been a team that’s embodied a ‘next man up’ mentality, but it’s generally pertained to the roster – one player, or multiple players, stepping up when somebody else has left the organization or gotten hurt. Recently, though, it’s been more like ‘next coach up’.

When this unusual and unprecedented season began a couple months ago, Nurse had seven assistants and four player development coaches on staff. Earlier this week, he lost one of those assistants – and his long-time friend – Chris Finch, who took the head-coaching gig in Minnesota. They’ve also had to manage without Sergio Scariolo, who was away from the club coaching the Spanish National Team in the FIBA qualifiers. Fortunately, that meant Scariolo wasn’t subject to the Raptors’ recent contact tracing.

Last weekend, Scariolo was in Poland coaching Spain to a couple of wins. He returned to Tampa on Monday and spent most of the week in isolation. After returning negative tests throughout his quarantine, he was cleared on Friday morning – lucky timing, as it allowed him to step in and help the Raptors out of their bind.

“I think this is a subject for a book more than for an answer,” the 59-year-old Italian said of this past week, following a 122-111 win over the Rockets – his first as an NBA head coach.

“Of course it was different, especially because everything happened so fast today. So we had to readjust tasks, timing, schedule. We had to go a little bit on the fly.”

Scariolo was the natural choice – a veteran in coaching with more than three decades of experience leading teams overseas and internationally, winning Olympic medals and World Cup gold with Spain in 2019.

They also didn’t have many options. Scariolo only had three coaches next to him on Friday – assistants Jim Sann and Jamaal Magloire, who moved up a row from their usual seats behind the bench, and assistant video coordinator Mark Tyndale. Had Scariolo not cleared quarantine in time, Sann would have likely gotten the call, or perhaps they would’ve been more inclined to bring Raptors 905 head coach Patrick Mutombo up from the G League bubble in Orlando, even though his team also played on Friday.

For the Raptors, the bench didn’t feel as empty as it appeared, though.

Even from home, Nurse directed most of the game preparation – he, Scariolo and the rest of the staff had multiple Zoom meetings throughout the day. Adrian Griffin was in charge of scouting the Rockets – the assistants rotate these assignments throughout the season – and made sure Scariolo and company were all caught up. Jama Mahlalela and Jon Goodwillie, who both recently moved up to the front row after Finch left and with Scariolo away, each chipped in.

Then there were the two floor generals, Lowry and Fred VanVleet – a nice luxury for any staff to have in its corner, especially one that’s in flux. Even without the mantle of player-coach, the rest of the team looked to them on Friday, as they do on most days.

“We make jokes about it, but [Lowry] does so much out on the court and he takes on a little bit bigger role [with the bench thinned out],” Webster said. “I've spoken to him a number of times, spoke to him this morning, put it in his head, he knew this was a possibility. Obviously with Fred, as well. Those guys are in many ways the de facto coaches out there, so just trying to get it in their head as early as possibly so they could think about it.”

It’s hard to imagine Lowry doing more than he did to propel his team to Friday’s win, which evened its record at 17-17 on the season. With 20 points, 11 rebounds and 10 assists, he recorded his 16th triple-double as a member of the Raptors and the 18th of his 15-year career. He needed just nine shots to do it, becoming the 11th player in NBA history to post a 20-plus point triple-double on fewer than 10 field goal attempts. Toronto outscored Houston by 22 points in his 33 minutes and was bested by 11 points when he was on the bench.

“I think that for me, and for Freddy and our organization and everybody, we kind of just we understood the situation,” Lowry said. “We didn’t want to make it over-complicated with everyone wanting to coach and everybody talking and this and that. They kept a semblance of what we usually do, and myself and Freddy you know we're always coaching the floor anyway.”

“It was about being a professional. We understand what we have to do. We understand the game plan. It's about doing it right. You learn in this league that you have to be a professional a lot more than anything else. You go in there and you got to prepare yourself. This is our job and this is our lifestyle. This is why we get paid and how we provide for our families, so you have to go out there and be a professional… Wall knew that we had to step up a little bit more and just make sure that we all stay composed and understand what the situation was going to be.”

The Raptors are one of only four teams that still haven’t had a game postponed, but that doesn’t mean their season hasn’t been impacted by the protocols. They’re playing their home games in a different country because of health and safety, after all. They had three members of the organization test positive for the virus in training camp, Norman Powell was questionable for the opener after somebody in his inner circle returned an inconclusive test, and there was that bizarre scene in Brooklyn, when Kevin Durant was out, then in, then ruled out again as a result of contact tracing.

But just when you think you’ve seen it all around the association – the league has already postponed 30 games this season – another curveball is thrown your way. The Raptors are the first team to have their coaching staff decimated by the protocols, and with three games left to play before next weekend’s all-star break, it’s unclear when they’ll get everybody back.

What is clear, though – in Lowry, they have somebody that can help steer them through it.

“This is the situation that we're in,” said the veteran point guard. “I’m going to be honest with you, I have no stress at all. I don't stress. There's no stress. Why would I be stressed for? Things are going to happen, some things you can control, so you control what you can control.”​