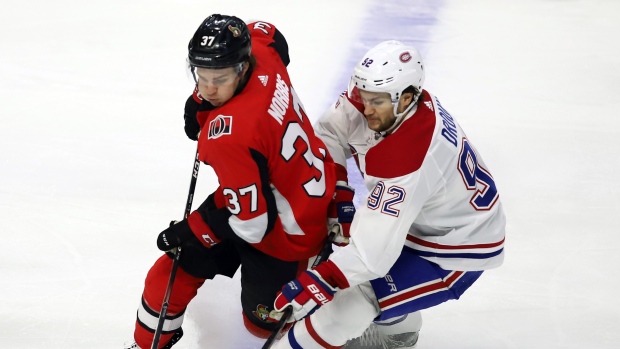 The Ottawa Senators skated at Canadian Tire Centre on Tuesday ahead of the team’s season opener Friday against the Toronto Maple Leafs.

The Ottawa Senators will carry the maximum allowable roster of 29 players this season. Sens head coach D.J. Smith said the players who skated on Tuesday were all part of that group, plus there needs to be three more additions to the taxi squad (likely exception is Jonathan Aspirot who was filling in for injured defenceman Thomas Chabot).

Josh Norris will begin the season as the Sens No. 1 centre between Brady Tkachuk and Drake Batherson. Norris, who has yet to score a goal in his three NHL games of experience, had a great rookie season in the AHL where he was named to the First All-Star Team.

“I'm obviously super excited and, you know, [being the No. 1 centre is] something that I had in mind coming into camp, so I'm super happy,” said Norris. “…I've been given a great opportunity so far and I've played with some really, really high-end players and just wanted to take full advantage of that opportunity, but at the same time stick to what I'm good at and know my strengths as a player and use that to help my wingers out and vice versa. …I think it's been great so far and I'm really looking forward to whoever is on my wing.”

Chabot was the lone notable absence on Tuesday. He was hit hard along the boards by Logan Brown in Monday night’s scrimmage. It led to a tussle between Brown and his long-time friend Tkachuk. Chabot said it was nothing major and he should be back on the ice on Thursday.

“No, nothing serious just the way I went down. Just a little sore this morning, so figured it would just be easier to get some rest and get some treatment on it to be ready for Friday,” he said. “I kind of fell awkwardly into the board that one time and [the injury] kind of came from there. [It] wasn't too bad to finish the second, and then during the intermission when you kind of get cold, that's where it kind of came back.”

With so many extra bodies, lines are being shuffled daily.

At Tuesday’s practice it appeared that Colin White’s line with Alex Galchenyuk and Michael Haley were the extra line as they were wearing grey jerseys.

But with three days remaining before their season opener on Friday, Smith said he is unsure what he opening-night roster will look like.

“We have five lines. …There are no final decisions. We had the practice today and we're going to review that and then we have one more practice and then we'll go from there. …Guys are going to be in and out all year and we don't know who is going to start on Friday night against Toronto, but we'll put our heads together and come up with what we think is the best starting group. …We've got 56 games in a short amount of period, so everyone's going to play.”

Defence pairs are reference only as they rotated around frequently