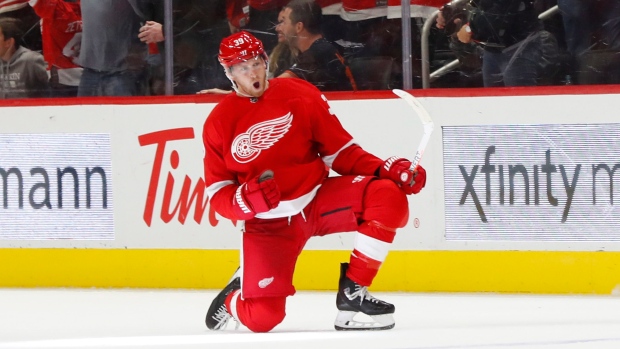 - The Oilers are off to a 3-0-0 start. The last time they did that was the 2008-09 season. The hot start is thanks in part to the second coming of James Neal – the Whitby, Ont., native has six goals, including four on Tuesday night against the Islanders. Neal had seven goals in 63 games played with the Flames last season. Four of his goals this season have come on the power play, all of them assisted by Connor McDavid. The Oilers’ power play has gone 4-for-10 over the past two games, with Neal scoring all four goals. Tuesday night was Neal’s seventh career hat trick and his first four-goal game. The winger’s last hat trick came in March of 2016, against the Oilers.

- Detroit right winger Anthony Mantha is another player with a four-goal game this season. He did that on Sunday against Dallas to earn the second hat trick of his career. Mantha has scored five of the Red Wings’ 10 goals this season and has also added two assists. He’s off to the best start of his career as the Red Wings are 2-1-0. Detroit had three wins (3-7-2) in all of October last season.

- No player is hotter than Rangers centre Mika Zibanejad. He has four goals and four assists through two games played to earn himself First Star of the NHL’s opening week. The Rangers are 2-0-0 with 10 goals, including three on the power play. Zibanejad had five goals, five assists in all of October last season. He might have that before the weekend.

- The Sharks just brought back veteran forward Patrick Marleau. When you’re 0-4-0 with only five goals, you need to find some offence. No player on the Sharks has more than one goal. San Jose has managed one power-play goal to start the season, going 1-for-17. They have one-even strength goal in each of their four games played. This losing streak ties the Sharks’ worst start to a season. The last time they were pointless through their first four games was the 1993-94 season. The Sharks picked up a point in game five that season. Right now it’s Shark Weak in San Jose.