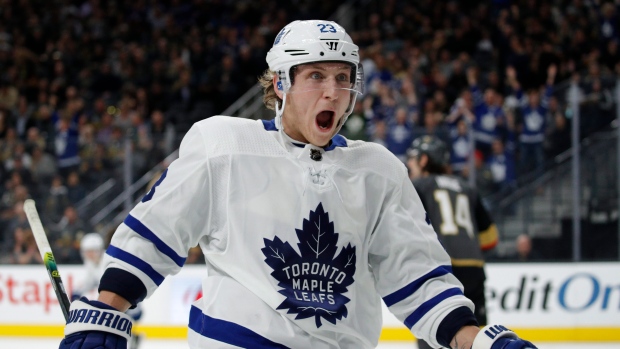 When Mike Babcock was fired on Nov. 20, it was a foregone conclusion that Sheldon Keefe would take over behind the Toronto Maple Leafs’ bench. Keefe had been groomed for years in the AHL with the Toronto Marlies, and a 199-89-22-9 record in the developmental league guaranteed he would get a shot at the NHL level.

Keefe assumed control of the Maple Leafs on Nov. 21, and team performance in the weeks since the transition has improved. Under Babcock, the team accumulated 22 points in 23 games with a minus-five goal differential at 5-on-5 and a minus-seven goal differential in all situations.

Under Keefe, the team has picked up 12 points in nine games with a plus-three goal differential at 5-on-5 and a plus-eight goal differential in all situations. Improvement is still a relative term, it should be noted – at the end of the day, this is still a team that was billed as a Stanley Cup contender and they haven’t shown that calibre of play under either regime this season.

I was curious to see what changes Keefe would make, particularly as a first-time NHL head coach. It’s one thing to make early tweaks to the lineup – tweaks that may not sustain after a few games of trial and error – but it’s another to truly effect change. Amongst many of the things Keefe has tried to do since taking over the job, the most notable change to date is on the blueline.

If you have flipped to a Leafs game recently, you likely notice two newer names seemingly playing all of the time. A pair of third- year pros in 27-year-old Justin Holl and 22-year-old Travis Dermott have moved from depth blueline presences who took the occasional relief shift under Babcock to prominent defensive fixtures under Keefe.

At multiple levels, the change made sense. Keefe coached both with the Marlies and may have a deeper understanding of the skills they bring to the table. But more importantly, most of the Maple Leafs blueline has been unimpressive all season long, opening the door of opportunity.

If we look at either 5-on-5 or all situations usage for the former Marlies, we see huge jumps in usage since Keefe took over. For most of the rest of the blueline, the reverse has happened:

This is a team in the process of transitioning from “top-four and a third-pair” mentality to rolling three defensive pairings in a relatively similar fashion. Whether that’s the right choice or not tends to depend on the personnel you have at your disposal, but it’s certainly implied here that Keefe thinks players like Dermott and Holl can be difference makers as puck movers on the back end. (And, it’s worth noting that Holl leads Toronto in 5-on-5 scoring from the blueline since the coaching change.)

From a performance perspective, it’s hard to say that Toronto hasn’t been rewarded for that decision.

Consider the on-ice numbers with Maple Leafs defenders since the coaching change. The goal rates appear unremarkable, but that’s largely because the goaltending has been intermittently poor with them on the ice. When we look at expected goal rates – which considers the shot volume and shot quality advantage for a given team with a player on the ice, unbiased from small sample goaltender performance, it’s clear that Holl and Dermott have been on the right side of the run of play: 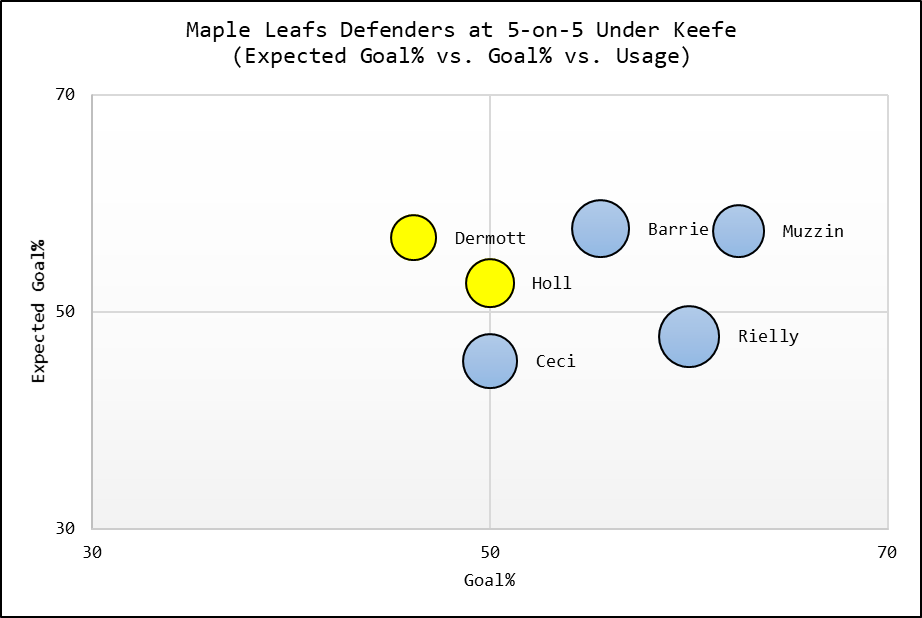 It’s true that Dermott and Holl are playing marginally fewer minutes than the other Maple Leafs defenders and that the quality of competition may be a bit diminished. But with both of these former Marlies on the ice, the Maple Leafs are generally playing more often than not in the offensive third, and I think some of that can be accredited to the fact that both are strong skaters and puck movers who can help transition the puck to jump-start the attack.

And context cuts both ways. Cody Ceci and Morgan Rielly, who have played exhaustive minutes under both Babcock and Keefe with Toronto’s premier forwards, have struggled to drive play and avoid the defensive mistakes and lapses that continue to plague this team. I think the unimpressive play of the Maple Leafs’ core defenders is a part of Keefe’s decision to reward Dermott and Holl with more minutes.

Now, let’s see if Keefe sticks to his guns as the season progresses.