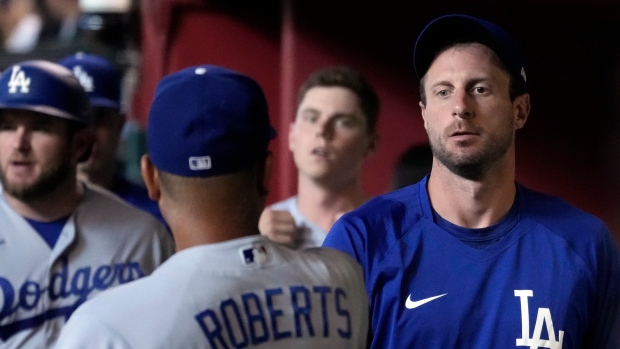 The game was tied at 3 in the seventh when Turner squared up a pitch from reliever Stefan Crichton that easily sailed over the left field wall and into the Diamondbacks bullpen. The Dodgers tacked on two more runs in the inning, including one on a pinch-hit, RBI single from Albert Pujols to take a 7-3 lead.

The Dodgers built an early 3-0 lead with a two-out rally in the second. Chris Taylor and Max Muncy hit back-to-back RBI singles and then the two pulled off a double steal. D-backs catcher Carson Kelly's throw to second to catch Muncy was way off the bag, which allowed Taylor to trot home easily.

The D-backs started a comeback in the fourth when Kole Calhoun's two-run homer to right made it 3-2. Nick Ahmed smacked a solo shot into the left-field seats in the fifth to tie the game.

D-backs starter Merrill Kelly (7-8) pitched into the seventh but was pulled after walking Muncy with one out in the seventh despite throwing only 88 pitches. Turner promptly crushed the no-doubt homer on Crichton's second pitch and the Dodgers were up 5-3.

Kelly gave up four runs, including three earned, on eight hits and two walks. He struck out six.

Mitch White had his first career start on the mound for the Dodgers in what was essentially a bullpen game. The right-hander threw 3 2/3 innings and gave up two runs on two hits and a walk. He struck out five.

Alex Vesia (1-1) earned the win with a scoreless inning of relief. The Dodgers had 16 hits.

Betts said the hip injury has been “weird” because he's not sure how it happened. He didn't think it would keep him out of action more than a few days but the soreness lingered and he needed a cortison shot.

“I'm usually in-tune with my body but I just missed that one,” Betts said.

The Diamondbacks announced Saturday that they've signed first-round draft pick Jordan Lawlar. The 18-year-old shortstop was ranked as the No. 1 overall prospect by Baseball American and No. 3 prospect by MLB.com.

Lawlar was the Gatorade Texas Player of the Year in 2021 and had committed to play in college at Vanderbilt.

Scherzer arrived to Arizona on Saturday. The three-time Cy Young Award winner was traded to the Dodgers in blockbuster deal with the Washington Nationals that also sent All-Star shortstop Trea Turner to the Dodgers.

The Diamondbacks activated outfielder Ketel Marte (hamstring) and sent INF Andrew Young to the minors. Marte has dealt with hamstring issues for a big chunk of the season but has been productive when he's played, batting .370 in 135 at-bats.

The two teams wrap up their three-game series on Sunday afternoon. The Diamondbacks will send LHP Caleb Smith (3-7, 4.61) to the mound to face Dodgers LHP Julio Urías (12-3, 3.54).