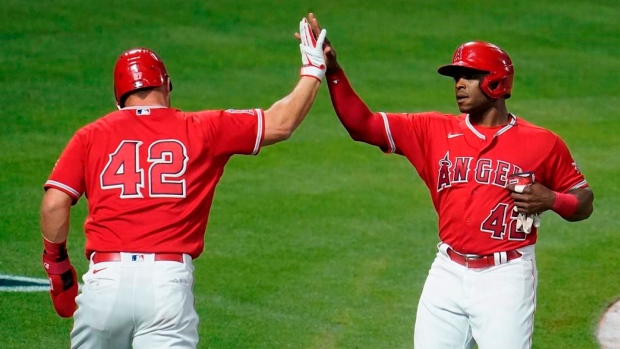 When Upton smashed a grand slam, Baldelli's decision was easy to second-guess.

In truth, Los Angeles' experienced hitters aren't allowing their opponents many easy choices during a strong start to the season.

“We've got a lot of guys that know what they're doing,” Upton said.

Upton hit his eighth career slam in the seventh inning, and Jared Walsh homered and drove in three runs in the Angels' 10-3 victory over the Twins on Friday night.

Trout delivered a go-ahead, two-run single as the Angels opened a six-game homestand with a prolific offensive performance. Upton's no-doubt homer — punctuated by his cool method of discarding his bat — was part of a six-run, six-hit rally in the seventh.

The veteran slugger didn't deny getting some motivation from the Twins' decision to pitch to him.

“You’ve got to use a little bit of it, I guess,” Upton said. “But it’s Mike Trout in front of you, so you’ve got to expect that. You’ve got to be prepared.”

Walsh immediately followed Upton's shot with his fourth homer in 12 games to start the season.

“I told (Upton) that was one of the coolest things I’ve ever been a part of, and I was just sitting on deck,” said Walsh, who also had an early two-run single. “They walk Trouty, which is understandable, and Justin makes them pay. ... When he hit the ball and I saw the bat drop and all that, my jaw was on the floor. It was just a really cool moment."

Mitch Garver had a two-run double and Josh Donaldson added a go-ahead single in the sixth for the Twins, who opened a six-game California road swing with their sixth loss in seven games.

“I felt in control of the game for the most part,” Heaney said. “Had a couple of walks I wasn’t happy about, but those guys turned a couple of double plays behind me.”

Indeed, the Angels turned four double plays for the first time since April 25, 2013.

Australian left-hander Lewis Thorpe yielded three hits over four innings in his first start of the season for Minnesota.

“I felt good out there and felt like I belonged,” said Thorpe, who has been at the Twins' alternate training site. “(Trout and Shohei Ohtani) are two excellent hitters, and they’ve got a good lineup. You can’t really be intimidated, or they’re going to beat you."

The Twins chased Heaney and then scored three runs on three consecutive hits off Aaron Slegers (1-0), but Los Angeles reclaimed the lead with three straight singles in the sixth. Ohtani shattered his bat before scoring along with David Fletcher on Trout's single to left off Randy Dobnak (0-3).

Aaron Slegers (1-0) was credited with the win.

Twins shortstop Andrelton Simmons missed his return to Anaheim after testing positive for COVID-19 earlier in the week. Simmons spent the past five seasons with the Angels, winning two Gold Gloves and becoming a fan favourite for his acrobatic defence.

After the game, Baldelli said the Twins had a second positive test from Friday morning's batch. Without disclosing details, Baldelli said some members of Minnesota's travelling party will be isolated at the team hotel for now, and he doesn't expect the result to hinder the series.

Willians Astudillo pitched the eighth inning for Minnesota in the second career mound appearance by a utilityman who has played every position. He retired the Angels in order on seven pitches, some as slow as 46 mph.

“You couldn’t really get in Willians’ way on this,” Baldelli said of Astudillo, who last pitched in 2018. “He was basically volunteering. I’m not surprised he can throw 45 mph strikes. He does it all.”

Twins: OF Byron Buxton sat out his fourth straight game with a mild hamstring strain. He planned to go through a full workout to test the injury.

Angels: Ohtani will throw in the bullpen Saturday before the team decides when his next start on the mound will occur. He hasn't started since April 4 due to a blister on his right middle finger.

José Quintana (0-1, 16.20 ERA) attempts to solve a poor start to his first season with the Angels. He faces Minnesota RHP Matt Shoemaker (1-0, 4.09), who set the Angels' rookie record with 16 victories in 2014 to begin five injury-plagued seasons under the halo.