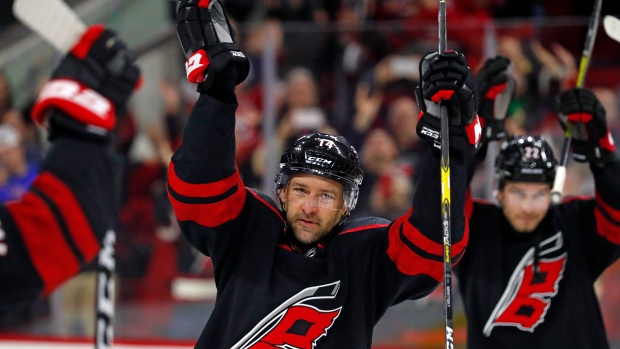 RALEIGH, N.C. — On a losing streak and missing their All-Star defenceman, the Carolina Hurricanes needed a boost Sunday.

They got one from Justin Williams, who returned to the lineup and scored in the eighth round of a shootout to lift Carolina over the New York Islanders 2-1.

Williams played for the first time since helping Carolina reach the Eastern Conference final last year. He took an extended off-season, signed with the club Jan. 8 and helped it end a three-game skid in his first game back.

James Reimer stopped six shots in the tiebreaker for Carolina, the last against Anders Lee to lock up the win. Andrei Svechnikov and Teuvo Teravainen also scored in the shootout for the Hurricanes. Svechnikov had a goal in the first period.

Lee scored in the second period and Mathew Barzal and Anthony Beauvillier connected in the shootout for New York, but the Islanders lost their third straight.

Reimer made 26 saves, none bigger than denying Barzal on a breakaway with 2:51 left in the third period.

"We had some chances," New York coach Barry Trotz said. "Their goaltender had some good saves. That was a playoff-style game."

Thomas Greiss turned away 31 shots for New York and was particularly sharp in the third period. He stopped Carolina's Ryan Dzingel midway through the period on a close-range shot and saved Joel Edmundson's try with 1:59 left.

Lee had two prime chances in the second period but was denied by Reimer.

"(Reimer) was great," Carolina coach Rod Brind'Amour said. "All of the sudden it opened up at the end there. There were a lot of grade-A looks for both groups. He stood his ground."

Hamilton broke his leg in Thursday's loss at Columbus. He's expected to be out for two to three months.

Williams, who helped the Hurricanes win the 2006 Stanley Cup and won two more with the Los Angeles Kings in his 19-year career, has been practicing with the team and provided an emotional lift. He played 13:06 on the fourth line and said he was unusually nervous.

Brind'Amour tabbed Williams after Svechnikov and Teravainen beat Greiss in the shootout but five others Carolina players couldn't.

"He had a good game," Brind'Amour said. "So he was definitely a guy I was going to throw out there. It was just a matter of when."

Williams was able to beat Greiss through the five-hole, and Reimer made it stand.

"He's a calming presence," Reimer said. "He's got that experience and then he can score big goals. It's great to have him back."

NOTES: New York RW Josh Bailey left in the second period with what the team called an illness. Bailey had six points in his previous five games against Carolina. ... Williams played on Carolina's fourth line, replacing F Jordan Martinook in the lineup. ... Svechnikov has 39 goals and 80 points in 131 career games, which leads all players from the 2018 NHL draft class. His first-period goal broke a New York defenceman's stick before ricocheting past Greiss.

Islanders: play at the New York Rangers on Tuesday.