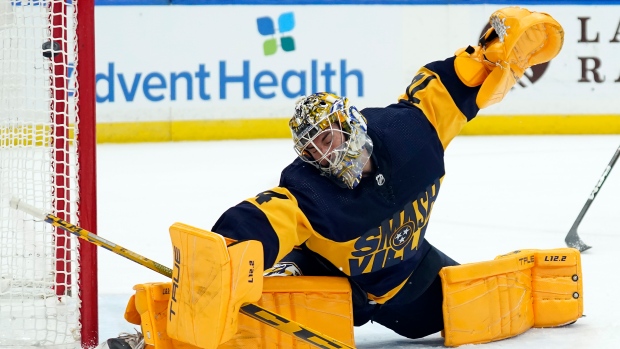 Nashville Predators goalie Juuse Saros left Tuesday's matchup with the Calgary Flames because of an apparent left leg injury and did not return.

The 27-year-old skated gingerly to the bench and limped down the tunnel with 6:32 left in the third period and the Preds leading 4-3.

Backup David Rittich entered the game and allowed a goal to Calgary's Matthew Tkachuk that tied the game 4-4 with one second remaining in regulation. The Flames then won the game in overtime on a goal by Elias Lindholm. Saros stopped 30 of 33 shots prior to departing while Rittich allowed two of the three shots he faced to find the back of the net.

Saros has been instrumental to Nashville's success this season, entering Tuesday's matchup with a record of 38-25-3, a save percentage of .918 and a goals-against average of 2.63.

A win by the Predators Tuesday night would have guaranteed them a spot in the Stanley Cup Playoffs.