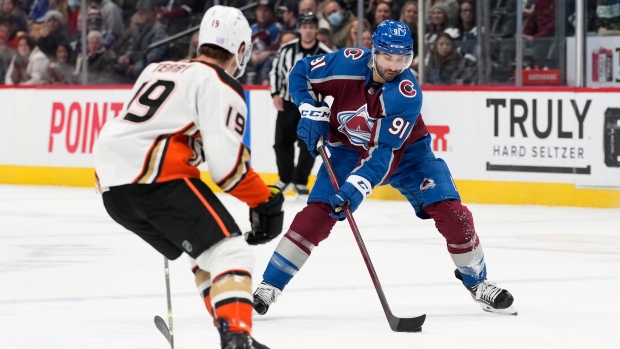 DENVER (AP) — Nazem Kadri kept up his scoring tear with a goal and an assist to lift the Colorado Avalanche over the Anaheim Ducks 5-2 on Wednesday night for their sixth straight victory.

Kadri extended his point streak to 10 games, the longest current run in the NHL. He has six goals and 15 assists during that span.

“Naz is producing at a crazy level right now and feeling really good and looks great out there,” said teammate Gabriel Landeskog, who had two assists.

Cale Makar also scored, his fifth goal in four games, and Jonas Johansson made 19 saves in relief of Darcy Kuemper. The win was the 194th for Jared Bednar, the most by a Colorado coach. He tied Bob Hartley on Monday night.

The Avalanche won despite losing Kuemper for a while to a broken skate blade. Valeri Nichushkin, Alex Newhook and Nicolas Aube-Kubel also scored for the Avalanche.

Sonny Milano had two goals and Josh Gibson stopped 32 shots for Anaheim, which has dropped three in a row after winning eight straight. The Ducks killed off six of the Avalanche’s seven power-play opportunities but struggled to find a flow after taking so many penalties.

“Colorado did a good job of beating us at our own game,” Anaheim coach Dallas Eakins said. “It’s not a good game plan for 14 minutes to play with one less guy on the ice. It disrupts our flow, we have our best players on the bench and it taxes our penalty killers.”

Kuemper’s equipment malfunction cost Colorado a goal. After his blade came off, Kuemper was prone in his crease with the Ducks controlling the puck. He made a pad save on Rickard Rakell’s initial shot but Milano tapped in the rebound at 4:58 of the first period.

Kuemper, who finished with five saves, also broke a skate blade in Monday’s win over Ottawa.

“You rarely see it happen once but I’ve never seen it as often — and certainly not in back-to-back games,” Bednar said. “It’s the holder that’s giving him trouble. It’s breaking and the trigger’s not holding the blade in and it’s falling out. The solution is he’s going to change holders to a different brand and put them on the skates he has so he’ll be ready to go for Dallas.”

Johansson took over in net before Kuemper returned with 9:47 left in the first. Johansson was in net to start the second and finished out the game.

Makar tied it at 19:06 with his eighth of the season, and Newhook’s redirect 2:49 into the second gave Colorado a 2-1 lead. Aube-Kubel’s wrister at 10:25 gave the Avalanche a two-goal cushion. It was his second goal since he was claimed off waivers from Philadelphia on Nov. 13.

“I hadn’t scored much in Philly and it’s good to have here and help the team win,” Aube-Kubel said.

Colorado had a two-man advantage for 1:53 spanning the second and third periods. Kadri scored 57 seconds into the third, his seventh of the season.

“It’s tough. You’re relying on a lot of the same guys to play big, hard minutes,” Ducks defenseman Kevin Shattenkirk said. “And once you get back to 5-on-5 some guys are tired and you’re asking guys to jump back in and resume their roles on their lines. It sucks a lot of life out of a team when you have to kill for too long.”

Nichushkin’s fourth goal made it 5-1 before Milano scored less than a minute later.

Avalanche: At the Dallas Stars on Friday night.