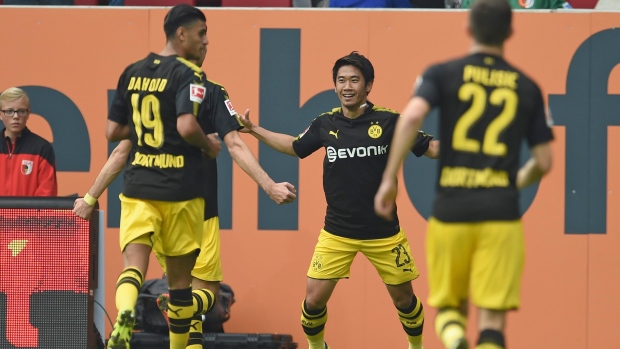 BERLIN — Shinji Kagawa became the highest scoring Japanese player in the Bundesliga by showing a touch of class to give Borussia Dortmund a 2-1 win at Augsburg on Saturday.

Kagawa, who scored 21 league goals in his first stint at Dortmund from 2010-12 before leaving for Manchester United, has 17 in his second stint after rejoining the club in 2014.

Kagawa's 38 goals put the former Cerezo Osaka midfielder one ahead of Shinji Okazaki, who played for Stuttgart and Mainz before leaving for English Premier League side Leicester in 2015.

Andrey Yarmolenko got Dortmund off to a flying start by scoring with his heel in a goalmouth scramble. It was the Ukraine forward's first Bundesliga goal since his arrival from Dinamo Kyiv.

It was only the second goal Dortmund conceded in seven games, while racking up 20 at the other end.

Kagawa made it 21 with a brilliant chip over the goalkeeper midway through the half as Pierre-Emerick Aubameyang and Yarmolenko took advantage of poor defending.

Augsburg pushed hard for an equalizer and had Dortmund pinned in the second half.

Aubameyang missed a chance to seal it from the penalty spot. Marwin Hitz caught the ball easily from his attempted "Panenka" chip down the middle.

"A hugely important win," Dortmund 'keeper Roman Buerki said. "These are exactly the sort of games you have to win if you want to get something."

Dortmund leads with 19 points after seven rounds following its best ever start to the league.

"That was the worst game today since I'm here as coach," said Peter Bosz, whose side lost at home to Real Madrid 3-1 in the Champions League on Tuesday.

Sebastien Haller scored with a spectacular scissors kick in the fourth minute of injury time for under-manned Eintracht Frankfurt to beat visiting Stuttgart.

Ante Rebic got the home side off the mark in the first half, but Stuttgart's fortune changed when Simon Terodde went on after an hour. He scored his first Bundesliga goal seconds later, and Simon Falette was sent off for bringing him down as the last defender shortly after.

But Haller sealed it with his fine strike.

Hannover was moments from a draw when Salif Sane brought down Vincenzo Grifo and the video assistant made the call to award the spot kick to 'Gladbach. Thorgan Hazard converted the kick.

Defeat ended Andre Breitenreiter's unbeaten record as coach after 15 games, despite Martin Harnik's fifth goal of the season to tie the game.

Wolfsburg's new coach, Martin Schmidt, had to be content with a share of points in a 1-1 draw against former side Mainz.