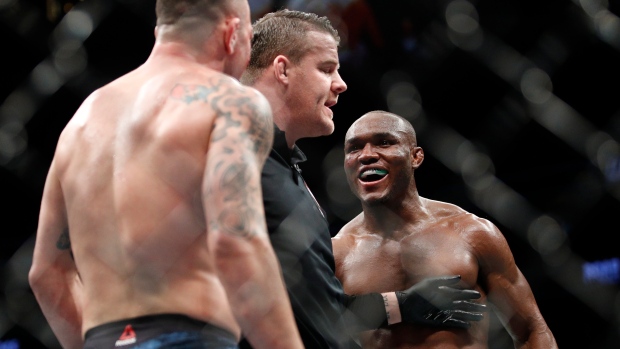 Conor McGregor appeared to challenge UFC Welterweight champion Kamaru Usman on Twitter Sunday after Usman successfully defended his title against Colby Covington.  It appears, however, that Usman has another UFC legend in mind for his next fight - Canadian Georges St-Pierre.

McGregor, who has held UFC titles at both featherweight (145lbs) and lightweight (155lbs), sent the following tweet after Usman's win.

Usman told TMZ Sports on Monday he doesn't believe McGregor would stand a chance against him in the octagon.

"He must want to die," Usman said. "This is not '45, '55. You saw what Khabib [Nurmagomedov] did to him. Oh my God. It wouldn't be fair if I fought Conor. Much respect to Conor for what he's done for the sport and transcended it. But nah. This ain't what you want. Just sit down, little man. Sit down. Learn to walk before you can run. Because I would hurt that guy."

Instead, Usman said he'd like to defend his title against the currently retired St-Pierre, who's considered the greatest welterweight of all time.

"If I had to choose, of course I want Georges," Usman said. "I want GSP. One more win and I tie him for the most consecutive wins. How sweet would that be to actually get that win off of him?"

St-Pierre won 12 straight fights in the welterweight division from 2007-2013, while Usman picked up his 11th straight win on Saturday night.

The 38-year-old St-Pierre, however, remains formally retired and has not fought since he won the UFC Middleweight title by defeating Michael Bisping in 2017. That fight came after a four-year layoff from fighting, but he has rumoured to be interested in a return.

If St-Pierre did agree to a fight, though, Usman said he doesn't believe it would go the distance.

"I think it's a big, big, big fight," Usman said. "All due respect to Georges, but I think I finish him."