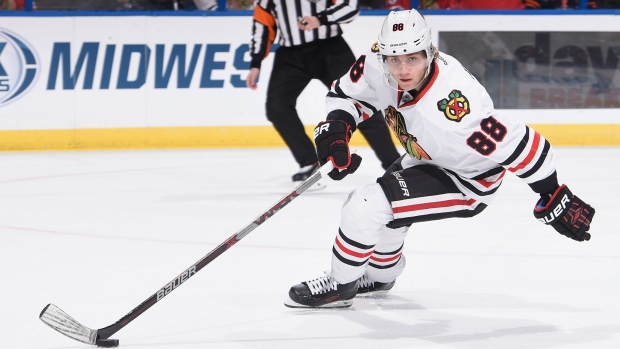 ST. LOUIS - Patrick Kane kept up his scoring streak and helped the Chicago Blackhawks get a big road win.

Kane scored the tiebreaking goal late in the second period to extend his points streak to 12 games and lead the Blackhawks to a 4-2 victory over the St. Louis Blues on Saturday night.

"I think we needed this sort of game to get back into the swing of things. It's kind of been up and down and this one was a good test for us."

Andrew Shaw, Trevor van Riemsdyk and Artem Anisimov also scored for Chicago. The Blackhawks, who had lost three of their last four and five of seven, snapped a five-game road losing streak.

"We needed a win on the road," Chicago coach Joel Quenneville said. "We know that we want to be known as a team that plays the same way everywhere we play. We didn't want to change how we play. We saw some other lines score for the first time all year, so I think that was the most positive thing we've seen and I think it can help us with the balance in our team."

Vladimir Tarasenko scored twice for the Blues, who had won three of four and six of their last eight. Jake Allen finished with 23 saves.

"We've played some good hockey the last few weeks," Blues defenceman Kevin Shattenkirk said. "That was a hard game. We know that we are always going to have tough games against these guys. I think we kept showing that we will fight and that's important. We never stopped, we always had chances to be in the game."

Kane's 12th goal of the season gave him nine goals and 11 assists during his streak — the longest in the league this season. He has 26 points in 17 games.

"We're pretty used to him doing that," Crawford said. "That's nothing new from him. He always finds a way to score big goals and he just doesn't stop."

The Blues beat the Blackhawks 6-5 in overtime in Chicago on Nov. 4. Chicago got some reinforcements for the rematch with the return of defencemen Duncan Keith and Michal Rozsival from injuries.

Keith, who missed 10 games after having surgery to repair a torn meniscus in his right knee, played 27:34 minutes in his return. Rozsival made his season debut after fracturing his left ankle in Chicago's playoff series against the Minnesota Wild last spring. He played 13:20.

The Blackhawks opened the scoring when Shaw tipped in a long shot from Keith at the 4:10 mark of the first period.

Tarasenko scored his ninth and 10th goals of the season in a 2-minute stretch during the second period to put St. Louis ahead. He tied it when he put home the rebound of his own shot at 6:32. After Marko Dano was called for boarding, Tarasenko beat Crawford with a wrister at 8:16 for the Blues' first power-play goal in 23 chances.

Chicago answered with two goals late in the second period.

First, van Riemsdyk scored with 4:43 left after St. Louis failed to clear the puck out of the defensive zone. Then Kane scored on the go-ahead goal on a power play with 1:05 left after slipping behind the Blues' defence.

Anisimov added an empty-net goal with 47 seconds remaining in the third.

"It was a huge win," Keith said. "No matter what we got the two points and thats the main thing, but at the same time I think it's a win we can learn from and build off of and get better from."

NOTES: F Ryan Reaves returned to the Blues' lineup after being a healthy scratch the previous two games. ... F Steve Ott (upper body injury) missed his fourth straight game. ... Referee Tim Peel officiated his 1,000th game and was honoured in a pregame ceremony with his family. ... The attendance of 19,808 was the fourth sellout in seven games for St. Louis this season. . Shattenkirk's second-period assist, on Tarasenko's second goal, gave him 200 career points.