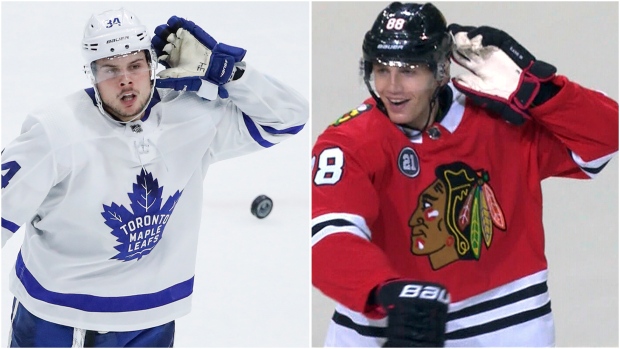 TSN Toronto reporter Mark Masters checks in daily with news and notes on the Maple Leafs. The Leafs and Blackhawks skated at Scotiabank Arena ahead of Wednesday's game.

During the summer, Patrick Kane and Auston Matthews were on the same flight from Detroit to Tampa.

“He’s a guy that, once you get to know him, he's really fun to talk to about hockey,” the 30-year-old Blackhawks winger said. "I was actually sitting next to [Chicago teammate Alex] DeBrincat, but he just came up and talked to us for two and a half, three hours, just about hockey and certain things in the past, just anything about hockey. He obvious​ly has a great interest in the game and those are the kind of guys that really love the game, that really have passion about it, that have a lot of success.”

In Tampa, the pair took part in a skills camp. A little more than a month later, on Oct. 7, the superstars were on the ice together again, ​wowing fans at the United Center during a 7-6 overtime win by the Leafs.

“It was pretty fun that night,” recalled the 21-year-old Leafs centre, “something you can always remember. Pretty cool to go head to head and have that kind of exchange with a guy like him who I’ve looked up to since I was a younger kid.”

“Those are the kind of things that help grow the game,” said Kane. “For us to go at it like that and have the celebrations like that, I mean, it was nothing planned, just raw emotion out on the ice and I think that’s when the best stuff comes out so it was a pretty cool moment. I don’t think it’s a moment either of us will forget.”

Since then both Matthews and Kane have had great seasons. Despite being slowed by a shoulder injury that forced him to miss 14 games, Matthews has 31 goals and 30 assists. Kane, meanwhile, is carrying his team on an unlikely playoff push with 41 goals and 57 assists.

“He's deceptive,” Matthews observed. “You never really know what he’s going to do. He's got the puck on his stick and draws so much attention to him that guys, they don't want to play him too hard because they don't want to end up on TSN highlights the next day and then he’s making a back-door pass over two sticks ... He's an incredible player and makes stuff happen every time he’s on the ice. He puts you on the edge of your seat every time he’s out there and it doesn't matter who he's playing with or what the situation is, he competes every night and he's always hungry for more.”

Matthews is certainly hungry for more after a rough performance on Monday night. The Lightning walked into Scotiabank Arena and humbled the Leafs 6-2. Afterwards Matthews offered up perhaps the harshest criticism we've heard from him since he became a Leaf noting that his team was “slapped” and “quit” in the third period.

Following Wednesday's skate, Matthews didn't back away from those words, but was also eager to turn the page.

"I mean, you never want to lose and you never want to lose like that," he said. "I think everybody was frustrated. It was pretty normal, especially after a game, so I think we learned from it ... There's no excuse. We’re just going to put that behind us and move on and try to put together a couple games here where we really play well, utilize yesterday's day off and re-energize."

Tampa Bay struck on a number of set plays off offensive-zone faceoffs and that was a focus during Toronto's skate.

“It's a big part of the centre’s job, but I think all guys need to jump and win those 50-50 battles,” said Matthews, "and that was a big issue with our game last game, we weren’t winning faceoffs, we weren’t winning battles and then they kept it simple, got to the puck to our net and then it’s going off three guys and it’s in the back of our net.”

“Certainly, there was a sense of disappointment,” said alternate captain John Tavares. “Knowing who we were up against and kind of that challenge and wanting to rise to that challenge and we didn’t come close and we just didn’t play very well. But, I think in the big picture, it’s one game of 82 and I think we’ve been a pretty good team all year.”

There's a sense of urgency in Chicago’s room as they try to cling to life in the playoff race. The Blackhawks trail the Arizona Coyotes by six points for the final wild-card spot with Minnesota and Colorado also ahead of them in the race.

A big issue all season has been defence with Chicago ranking 30th in goals allowed (3.7 per game), but there is some sign of improvement of late with just two goals allowed in the last two games.

“Our back pressure has been really good,” Kane noted. “We're being a little bit smarter with the puck, not as many turnovers or giving up those odd-man rushes. And I think everyone’s bought into the team game the last couple games, especially when you know how much is on the line. They’re must-win games and you've seen that come to life a little bit.”

Corey Crawford has also played a big role posting a 4-1-0 record since returning from a concussion on Feb. 27.

Often an eternal optimist, even Mike Babcock admitted it wasn't easy to get over what happened on Monday night.

“I'm usually the sun gets up the next day and I bounce back like you can't believe. Yesterday was a little harder,” the Leafs head coach said.

There will be no lineup changes for Toronto tonight, but Babcock was certainly tempted.

“There were lots of volunteers after last game to come out, right?”