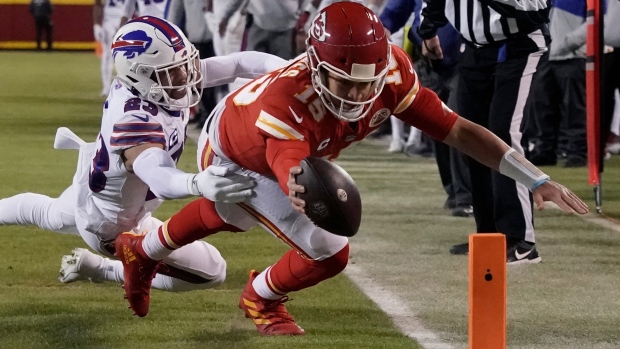 The Buffalo Bills and Kansas City Chiefs are tied 14-14 at halftime of their Divisional round meeting.

The Bills opened the game with a 15-play 71-yard drive, ending with a Devin Singletary touchdown to take an early 7-0 lead.

The Chiefs would come right back down the field, and Patrick Mahomes would put them on the board with an eight-yard rush for a score.

Just when it looked like it would be a shootout, the offence's began to stall.

However, with under two minutes to go in the second, Mahomes connected with Byron Pringle to give the Chiefs the lead.

But Allen would lead another 70-yard drive, this time nine plays and just 1:15 minutes to tie the game.

Kansas City got into field goal range at the end of the half, but Harrison Butker missed wide right.

Pro Bowl safety Tyrann Mathieu was placed in the concussion protocol and ruled out of Sunday night's divisional playoff game against Buffalo after taking a knee from teammate Jarran Reed on the opening drive.

Mathieu walked off the field and was met by Chiefs coach Andy Reid. The two of them spoke briefly before Mathieu took a knee, then went to the injury tent and eventually into the locker room to be evaluated for a concussion.

The injury forced the Chiefs to use backup Daniel Sorensen, one of the lowest-graded safeties in the league according to Pro Football Focus, alongside starter Juan Thornhill for the remainder of the game.