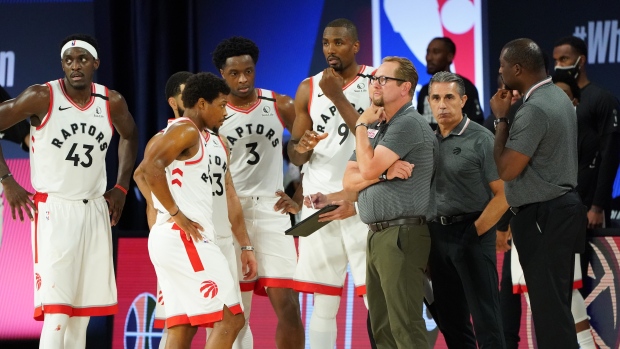 Kansas City is continuing their push for the Toronto Raptors.

As travel between Canada and the United States remains difficult and may for some time in the wake of COVID-19, the Raptors could be forced to adopt an American home for the 2020-21 NBA season if they’re not able to play at Scotiabank Arena.

Rumours have swirled about possible locations in recent weeks, but perhaps no chatter has been as loud as that surrounding Kansas City.

The city’s mayor, Quinton Lucas, joined TSN Radio 1040’s Halford and Brough Thursday morning to discuss why he thinks K.C. is a viable option and reiterate that his city isn’t trying to steal the Raptors for good.

“On the whole, everybody I think understands the situation. And, you know, I think they get that if it comes to a need that the Raptors play in the United States, then you might as well pick a place that is a new market, provides some new opportunity, has other large cities close to it that also don’t have the NBA, like St. Louis for example. I think it could be a very nice short relationship,” Lucas said.

“Everybody knows we’re not trying to steal the Raptors. There is no way we could ever do that. The Toronto area has millions more people than we do. But this is more of a thing of hey, let’s just see if we can show our best and put our best foot forward and be a good host for the Raptors for a little while.”

Last week, it was rumoured the Raptors were considering Louisville, K.Y., as a possible home should they need to play stateside. Although nothing has really come of it yet, Lucas said seeing that led gave him the idea of throwing his city’s hat in the ring.

“I’ll actually just be completely honest. We saw rumours that Louisville was mentioned and Buffalo. I mean no disrespect to those two cities, but I thought, you know, we’re a major-league city. I’ve been to both of those places. They’re nice, but we’re a larger market. We’re a growing market.”

Although the Raptors have not commented publicly on a potential temporary American home, things escalated Monday night when Kansas City Chiefs quarterback Patrick Mahomes tweeted support for the Raps playing in K.C.

Lucas said the tweet has made residents even more excited about the possibility.

“Folks have been looking to try to relocate an NBA franchise permanently for a while. And of course this isn’t that, but this would be a great test run and then we got a great signal boost from Patrick Mahomes, our Super Bowl MVP quarterback who not only tweeted about it over the weekend, but then also talked about it after practice the other day and now Kansas City is going wild for the Raptors.”

The NBA left Kansas City for good after the 1984-85 season when the Kings headed west to Sacramento. The franchise spent 13 seasons there after arriving as the Cincinnati Royals following the 1971-72 campaign.

The NBA has not yet announced a start date for the 2020-21 regular season, though multiple reports indicate the league is pushing for a return in late December just before Christmas.

While the league – along with the Raptors – returned to play in a bubble environment in Orlando, the same can’t be said for other Toronto teams. The Blue Jays called Sahlen Field in Buffalo home while Toronto FC has been playing MLS games out of East Hartford, Conn. due to U.S.-Canada border and quarantine restrictions.