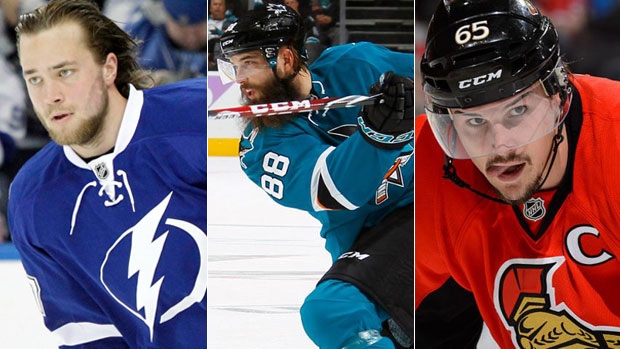 NEW YORK — Ottawa Senators defenceman Erik Karlsson is one of three finalists for the James Norris Memorial Trophy for the third consecutive season and fourth time in the past six years.

Karlsson, along with Brent Burns of the San Jose Sharks and Victor Hedman of the Tampa Bay Lightning were announced Friday as the top three finalists for the award, which goes to a defenceman who demonstrates the greatest all-around ability in the position.

Members of the Professional Hockey Writers Association submitted ballots for the Norris Trophy at the conclusion of the regular season, with the top three vote-getters designated as finalists. The winner will be announced Wed., June 21, during the NHL Awards in Las Vegas.

Karlsson ranked third among NHL defencemen with 17 goals and 54 assists, the fourth time he has cleared the 70-point and 50-assist milestones in his eight-season career. He also ranked second in the NHL in blocked shots (201) and fourth in average ice time per game (26:50).

The Senators captain, who is the second defenceman in league history to lead his team in scoring in four consecutive seasons, is vying for his third career Norris Trophy. He won the award in 2012 and 2015 and finished second in voting last season.

Burns set franchise records for goals and points by a defenceman for the second consecutive season, posting 29 goals and 47 assists to top all NHL blue liners in scoring. Burns finished third in Norris Trophy balloting last season in his first year as a finalist.

Hedman's standout season was highlighted by career-highs in goals (16), assists (56), points (72), games (79), game-winning goals (five), average time on ice per game (24:30) and blocked shots (132). The first-time Norris Trophy finalist set single-season Lightning records for assists and points by a defenceman and became the franchise's all-time leader in those categories as well.