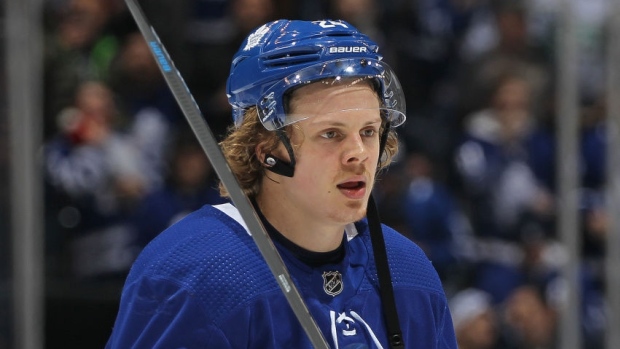 TORONTO – Kasperi Kapanen says a late arrival to practice on Friday led to him being a healthy scratch in the Maple Leafs’ 2-1 overtime win over the Ottawa Senators on Saturday.

“They felt like sitting me out was something I deserved and I agree,” Kapanen said Monday after the Leafs’ morning skate, ahead of facing the Florida Panthers. “So I just have to take responsibility for that.”

Head coach Sheldon Keefe touched on the matter briefly Saturday night, saying only that Kapanen’s absence was due to “internal accountability” and that the winger would fill in the details himself.

When he did, Kapanen also copped to having been late to practices when he played for the American Hockey League’s Toronto Marlies, without mentioning any problems with the Leafs prior to Friday’s incident. Saturday marked the first game he had missed all season for Toronto.

But Keefe, who coached Kapanen with the Marlies from 2015-18, said he couldn’t recall any such issues, and that the decision to scratch him was based entirely on Kapanen’s behaviour this season.

“It all had to do with [what’s happened] here, previous to my time coming and since arriving here,” said Keefe, who took over as Leafs' head coach on Nov. 20. “I think we're a pretty forgiving place, even when things happen. Things happen all the time. When there's a pattern of things that haven't corrected themselves, then you have to do something a little bit outside of what you'd normally do.”

Keefe refused to offer up any particulars (“I don’t think that’s important or necessary”) but stressed he didn’t feel the situation was a big deal and hoped simply that Kapanen would learn from it.

“Any time you get called out like that and are held accountable, it gives you an opportunity to reflect and grow from it,” Keefe said. “And that's what we're looking for.”

The 23-year-old winger wasn’t feeling contemplative on Monday though, shrugging off a question about whether he'd reflected on his actions.

“I just overslept; I don't really know what there is to think about,” Kapanen opined. “Obviously, I don't want my teammates to think that I'm not serious about this or whatnot. They sat me out and that's that.”

Kapanen also said he didn't think the incident would hurt his standing within the organization, but shut down the topic when pressed on why he felt confident that’s the case.

“Listen guys, if you guys want to talk about hockey I'm all for it,” he said. “Talk about today or the future, that's fine, but I overslept and that's that.”

Inside the Leafs’ dressing room, Kapanen’s teammates said he has made sufficient amends.

“I think Kappy owned his mistake and I think he feels bad about it,” said John Tavares. “No one's perfect. We support Kappy. It was an honest mistake and I know he's excited to be back and be in it. As a team we all understand what it means to be professional and what we have to do every day.”

Tavares said Kapanen had gone up to guys individually to apologize for his behaviour but hadn’t formally addressed the group. Following Keefe’s lead, the Leafs’ captain tried to downplay the situation by insisting it could be getting “blown out of proportion.”

“I think it was just an honest mistake. I don't think he's trying to come in and be unprofessional and whatnot,” Tavares stressed. “You get to this point in the season and sometimes you forget what day it is. I think he feels bad about it and it's just an honest mistake. I think he brings a lot to our team. He's well-liked in our locker room and works hard every day. We appreciate Kappy as a player and a person.”

Asked whether he was surprised that Kapanen was punished so harshly, Tavares theorized it had to do more with honouring the values the organization is aiming to uphold.

“The sense that we got is there's a certain expectation and standard – especially with what we're trying to accomplish,” he said.

Kapanen was back in his usual third line place with Andreas Johnsson and Pierre Engvall at the Leafs’ morning skate, a sign of how eager Keefe is to turn the page on what he views as a minor blip.

“This is not punishment or anything like that,” Keefe said. “It's just about trying to reset the player and try to help him grow and get better. We want him to be the player that he's capable of being and we want our team to play very well. He's going to get a great opportunity. We need him to be great and I fully expect that he will be.”