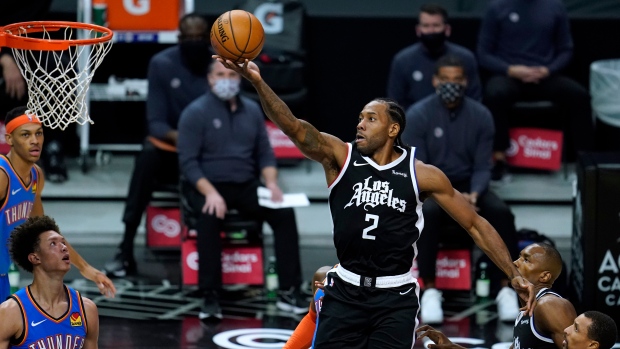 Serge Ibaka added 17 points. At 13-4, the Clippers are tied with the Lakers for the best record in the NBA. Leonard also had nine rebounds and eight assists. He had 31 points in a 14-point victory over the Thunder on Friday night.

Shai Gilgeous-Alexander led the Thunder with 23 points against his former team, and George Hill added 22 points. Oklahoma City has lost three in a row and five of six.

Antetokounmpo had eight assists, finishing two shy of a triple-double. Bobby Portis added 21 points, and Khris Middleton had 19 for Milwaukee.

BOSTON (AP) — Jaylen Brown scored 20 of his 33 points in the third quarter and Boston cruised past Cleveland to snap a three-game losing streak.

Collin Sexton led Cleveland with 13 points, far below his team-leading average of 26.8, The Cavaliers had won three in a row.

The Wizards had their previous six games postponed because they did not have enough eligible players due to the NBA's COVID-19 protocols. Washington was playing for the first time since Jan. 11, when it beat visiting Phoenix.

The Raptors have won two straight and five of their last six, including this one without injured All-Stars Kyle Lowry and Pascal Siakam.

Myles Turner had 25 points and six blocks for Indiana. The Pacers have lost three of four.

ORLANDO, Fla. (AP) — Gordon Hayward broke a tie with a layup with 0.7 seconds left and scored 39 points in Charlotte's comeback victory over Orlando.

Hayward beat Evan Fournier off the dribble and made the left-handed layup after Orlando’s Terrence Ross tied it with a 3-pointer with 8.7 seconds to play.

The teams will meet again Monday night in Orlando.

Nikola Vucevic topped 10,000 career points and finished with 22 points and 13 rebounds for Orlando.

PORTLAND, Ore. (AP) — Damian Lillard had 39 points, including six 3-pointers, and rested Portland jumped out early against New York on the way to the win.

Anfernee Simons added 16 points off the bench for the Blazers, who led by as many as 25 points before seeing their advantage slip away in the final quarter.

Immanuel Quickley scored 31 points off the bench and Julius Randle added 25 for the Knicks.