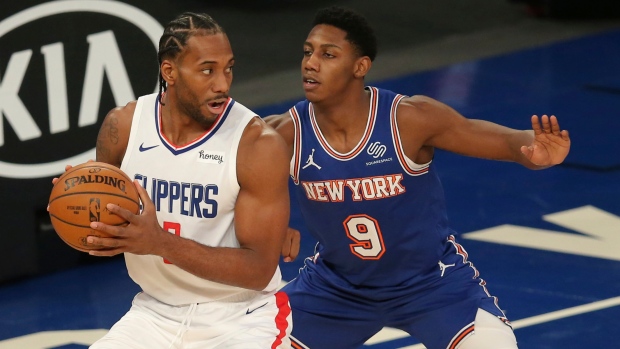 LOS ANGELES (AP) — Kawhi Leonard is staying in Los Angeles after the Clippers re-signed their free-agent superstar on Thursday.

Leonard averaged 26 points, 6.8 rebounds and five assists in his first two seasons with his hometown team.

He suffered a partially torn right ACL during the playoffs and missed the Clippers’ first Western Conference finals appearance. Leonard had surgery on his knee a month ago. The team has said there's no timetable for his return, and it’s possible he could miss a good portion of the upcoming season while rehabbing.

Leonard declined his $36 million option last week, setting up his ability to sign a maximum contract worth 35% of the team’s salary cap and allowing him to earn upwards of $3 million more for the 2021-22 season.

By re-signing Leonard, the Clippers are guaranteed to have him and Paul George in the fold for the next few seasons. George signed a maximum contract extension last December. Leonard is from nearby Moreno Valley, and Paul is from Palmdale, north of Los Angeles.

The five-time All-Star averaged 24.8 points, 6.5 rebounds and a career-high 5.2 assists last season, while shooting 51% from the field and 88% from the line. He was named to his seventh All-Defensive team and his third All-NBA first team last season.

Leonard was even better in the postseason. He averaged 30.4 points, 7.7 rebounds and 4.4 assists in 11 games. He first got injured in Game 4 of the Clippers' second-round series against the Utah Jazz. He was held out of the last eight postseason games, including the Clippers’ 4-2 loss to the Phoenix Suns in the West finals.

He still had a presence around the team, despite being unable to play.

“Kawhi is a transcendent player and a relentless worker who improves himself every day,” said Lawrence Frank, president of basketball operations. “We share many of the same goals, which include a long-term relationship.”

Frank said the Clippers will “do whatever we can” to support Leonard in his injury rehab.

"We look forward to seeing him back where he wants to be, on the court with his teammates,” Frank said.